Graph Writing # 187 - Steps in the hiring process at ACME corporation

The diagram below shows the steps in the hiring process at ACME corporation. 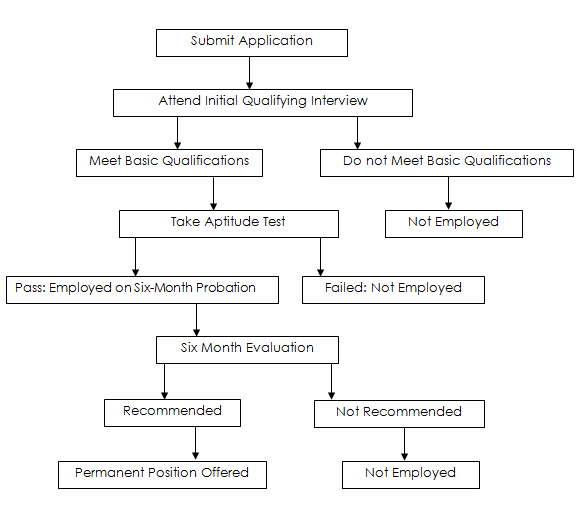 Model Answer 1:
The provided flow chart illustrates the process of recruitment at ACME corporation. A quick look at the illustration reveals that there are four major steps overall, three of which will eliminate unsuitable candidates to filter out the deserving candidates for the jobs. Those who are recruited to ACME corporation must possess basic requirements, pass the aptitude test and be recommended after the process of probation evaluation.

Initially, a person must hand in his or her application in order to be eligible for a qualifying interview, which will determine whether candidates meet the basic requirements or be eliminated.

Those advanced will take an aptitude test, which classifies them into two categories - "pass" or "failed". Candidates in the fail category are denied any job positions, just like those who do not meet the basic qualifications. The final important step in the process is the 6-month probation, in which candidates are evaluated. And to be offered a permanent position in the firm, one must be recommended.

Sample Answer 2:
The process diagram shows different stages of ACME corporation's recruitment process, commencing from application submission by the prospective candidates, which ends by either offering a permanent position in the company or denying any position at all.

As is presented, initially candidates are invited to submit their applications to be considered for the jobs in ACME corporation. Those who apply to this company for a job have to attend an initial qualification interview. The authority distinguishes the candidates who have faced the interview in two categories - 'meet the basic qualification' and 'do not meet the basic qualification'. The applicants of the latter category are disqualified while the candidates who meet the qualifications are further tested. In the next step, the qualifying applicants take an aptitude test, based on which they are either marked as failed or passed. Failed candidates are left out from the recruitment process while the successful applicants are offered a position on a six-moth probation who are evaluated after the probation period. At this stage, a recommendation made either to discard those temporary employees or to offer them permanent positions in the company.

Sample Answer 3:
The flow chart shows the steps followed by the ACME Corporation to recruit new employees. A quick glance at the process reveals that an applicant has to qualify in different stages to be permanently employed in this organisation.

As is observed, the recruitment process commences with the invitation to prospective candidates to submit their applications. These applicants are then called for an initial qualifying interview which determines whether they meet the basic requisites or not. Failing in this interview does not qualify some candidates for any further process, while successful applicants sit for an aptitude test in the next level. As for the aptitude test, passing it leads to a probationary job placement for six months but those who fail are then rejected. An evaluation stage is followed by the six-month probation period which determines whether applicants would be offered a permanent position while the non-recommended temporary employees would be discarded from the job.