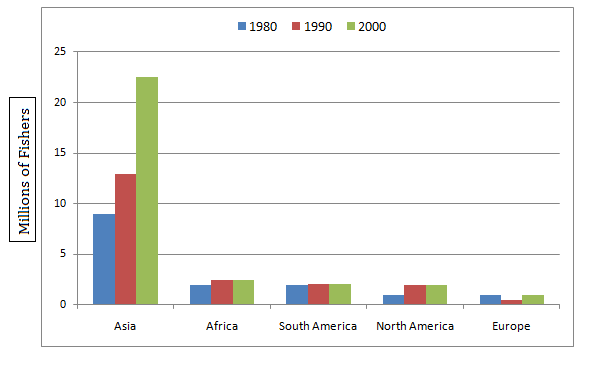 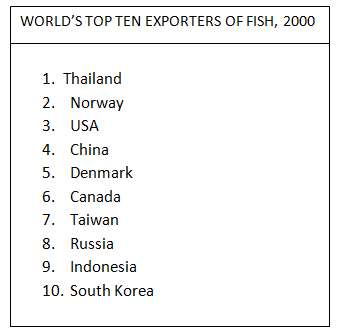 Sample Answer 1:
The column graph gives the number of fishers in five different regions in three decades- 1980, 1990 and 2000, while the table lists down the globally top ten fish exporting countries in 2000. Overall, the number of fishermen in Asia soared over the period and Thailand, Norway and the USA was the top three fish exporters in 2000.

Now turning to the details, there were nearly 9 million fishers in Asia in 1980 which was almost double than the combined number of fishers in Africa, America and Europe. Asian population who lived on fishing increased by roughly four million in the next decade while a marginal growth could be observed in the case of other areas except in Europe where the number of fishers actually dropped. In 1990, fishers number in Africa, South America, North America and Europe was less than a million and during the next decade, these numbers remained almost the same except in Europe that witnessed a fractional jump. On the contrary, the number of fishermen in Asia dramatically upsurged and stood at just over 23 million which was overwhelmingly greater than the number of fishers in other parts of the world.

The table presents that, in 2000, Thailand was the top exporter of fish globally and the second and third position of this list were held by Norway and the USA despite their remarkably fewer number of fishermen than Asia. The fourth, seventh and tenth positions of the top ten fish exporting countries were occupied by four Asian countries while the rest were held by other non-Asian countries.

Model Answer 2:
The chart compares the population of fishermen from five different regions in three decades - 1980, 1990 and 2000, and the table lists the top-ten fish exporters in the year 2000.

Overall, the highest number of fishers lived in the Asian continent and their number soared dramatically and more rapidly than any part of the world. Moreover, five Asian countries were positioned on the global top-ten fish exporter list in 2000.

In details, approximately 9 million fishermen lived in Asia in 1980 which was more than the combined fishers in the rest of the world. In this year, Africa and South America each had around 2 to 3 million people whose profession was fishing. The number of fishermen in North America and Europe was even fewer this year. Next decade, Asian fishermen population increased to over 13 million where these numbers slightly grew in African and American continents. In 2000, around 23 million population in Asia were fishers, almost double than the previous decade, while the rest of the continents had around 8-9 million fishermen in total. European fishers were minorities with fractional fluctuations over the range of half a million to a million, the least in any continent.

Tuning to the table data, Thailand, Norway and the USA ranked the top-three fish exporters in 2000.  Despite the small population of fishers in Europe, Norway and Denmark held the second and fifth places on the list. Four other Asian countries were listed among the top-ten while no African country was found on the list.

RSS
Bianca 5 years 10 months
The column graph gives the number of fishermen in different continents of the world in three decades -1980, 1990 and 2000 while the table shows the top ten fish exporters in 2000.

It is apparent that the Asian continent had more fishers than any other continent in the given period and Thailand was the top fish exporting country in the year 2000.

As is observed, Asia had nearly 9 million fishermen in 1980, followed by around 13 million in 1990 and almost 23 million in 2000. It is clear that the number of people in Asia who were involved in fishing-related activities significantly increased in 30 years. The number of fishermen remained steady in South America with an average of 3 million and in North American and African regions, the number had an increase from 1980 to 1990 but did not change much in 2000. The fishermen in Africa was 2.5 million and in North America approximately 2 million in 2000. The lowest number of fishers could be observed in Europe, about 1 million in the given time. It is evident that the largest percentages of fishermen were from Asia in these decades. The five world largest fish exporters in 2000, were Thailand, Norway, USA, China and Denmark. Russia, Indonesia and South Korea were in the last three positions of the highest fish exporting country list in 2000.