The bar graphs below show the Riverdale Public School’s spending per student in a year as well as percentages of students who passed the reading and math tests from 1990 to 2005. 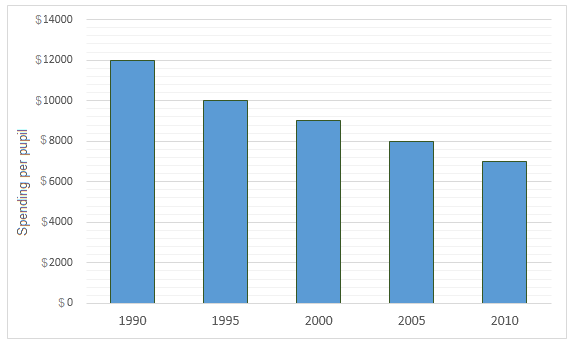 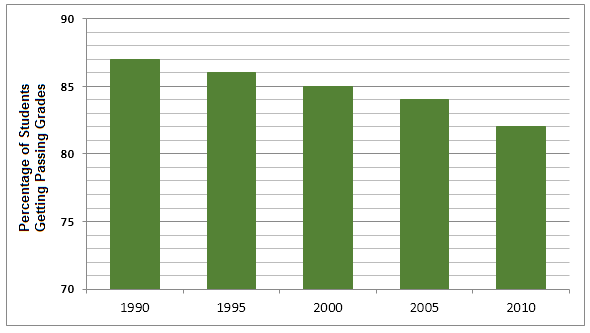 Sample Answer 1:
The first bar graph shows yearly spending for each pupil in Riverdale public school from 1990 to 2010 while the second graph shows the percentages of students from the same school who passed in reading and math tests during the same period of time. As can be seen, yearly spending for each pupil in Riverdale School decreased over the time and the percentage of pupils who passed the tests has also dropped.

The second bar graph shows that the percentages of students in Riverdale school who passed the reading and math test kept on declining over the time. In 1990, approximately 87% pupils passed these tests while in 2000 this percentage dropped to 85%. Finally, 82% secured their pass score in these tests in 2010 which was a 5% drop from the initial percentage of students who got the pass marks.

RSS
Nguyen Thuong Vu 2 years 2 months
The given bar graphs illustrate the yearly spending by Riverdale Public School for each pupil and the proportions of students in this school who succeeded in passing the reading and math tests in a 20-year period. The statistics are provided for each half-decade.

Overall, both the amount of money and the percentage of students passing exams declined stably over the period. More specific information will be summarized in the following paragraphs.

To begin with, 12 thousand dollars per student was what Riverdale Public School spent to cover its pupils' expenses, in the year 1990. The figure decreased to 10 thousand for each pupil five years later and then dropped consistently until 2010. After 1995, a 1000-dollar decline can be seen after every 5 years, and in 2010, the school spent exactly 7,000 dollars for every learner.

Regarding the second bar graph, 87 percent of students in Riverdale public school managed to pass the reading and math tests in the year 1990. The figure decreased steadily by 1 percent every five years until 2005, and in this year it was 84%. And finally, the percentage of exam-passing students was 82% in 2010, according to the illustration.