The bar chart below shows the proportions of English men and women of different ages who were living alone in 2011. The pie chart compares the numbers of bedrooms in these one-person households.

Living alone in England by age and gender, 2011 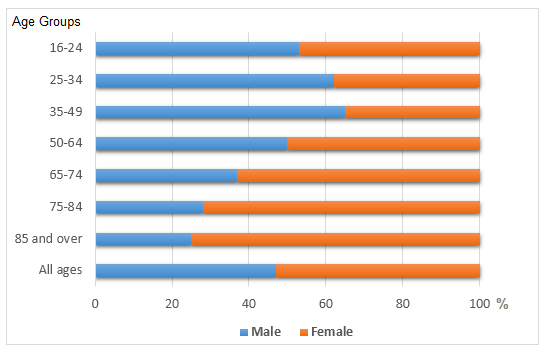 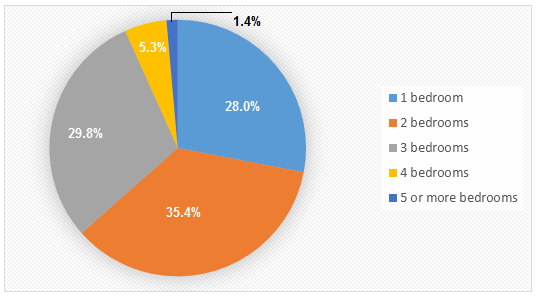 Sample Answer:
The bar graph compares the ratio of English males and females from different age groups who lived individually in 2011, while the pie chart shows the number of bedrooms they had. Overall, more British women lived alone when they got older and most of these separately living persons' houses comprised one to three bedrooms.

According to the bar chart, more British females, roughly 55%, lived alone than that of males in 2011. This is particularly true for the aged women since roughly 70% of them lived separately compared to less than 30% males over 65 years old. The ratio of both genders living alone who were 50 to 64 years old in 2011 was exactly the same. However, younger English males preferred to live individually more than their female counterparts. Six out of ten, on an average, were men who lived solo when they were younger, 16-49 years old. The highest percentages of single males of this category were between 35 to 49 years old while this ratio was highest for the women over 80 years old.

The pie chart depicts that most of the single persons’ houses had one to three bedrooms and two-bedroom houses for such people was the highest, around 35%, exceeding the three-bedroom apartments by roughly 6 percent. Scarcely they had larger houses with many rooms and around one-fourth of these homes had only one room.

RSS
Xuehang Bai 3 years
The numbers are not enough and specific.