The pie charts show the highest education level of women in Sri Lanka in 1965 and 1995. 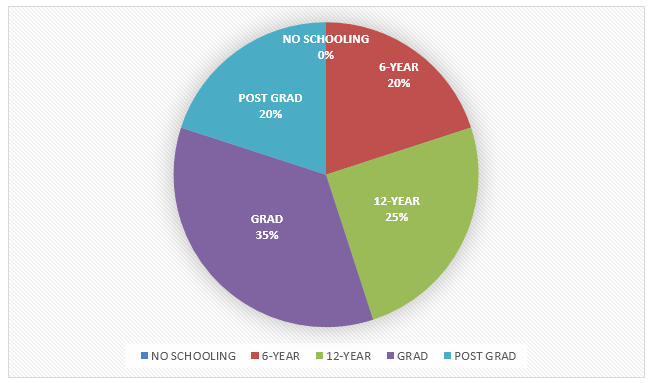 However, after three decades, this scenario changed exceptionally when one in every five Sri Lankan women hold a post-graduate qualification and no woman was unschooled. Exactly one-quarter of them completed 12th grades while graduate women comprised 35%. It is worth noticing that no women in this period were uneducated and that was a remarkable progress in terms of women education in Sri Lanka. Finally, 20% female in this year completed their primary education which was exactly the same ratio of post graduate women in this year.

In 1965, only 15% Sri Lankan women completed secondary education and only 3% completed their graduation. No women, in this year achieved a post-graduation qualification. A great percentage of Sri Lankan women, 35% to be exact, did not go to school at all.

In 1995, 80% Sri Lankan women had completed their secondary education which was a remarkable improvement compared to the scenario 30 years earlier. 55% females had achieved graduation degrees while 20% had completed post-graduation studies. In this year, all girls attended schools and completed their primary education, though 20% of them ended their schooling at this point. This is a stark contrast with the women education level in 1965 when more than one-third of them received no education at all and 65% ended with the elementary education only.