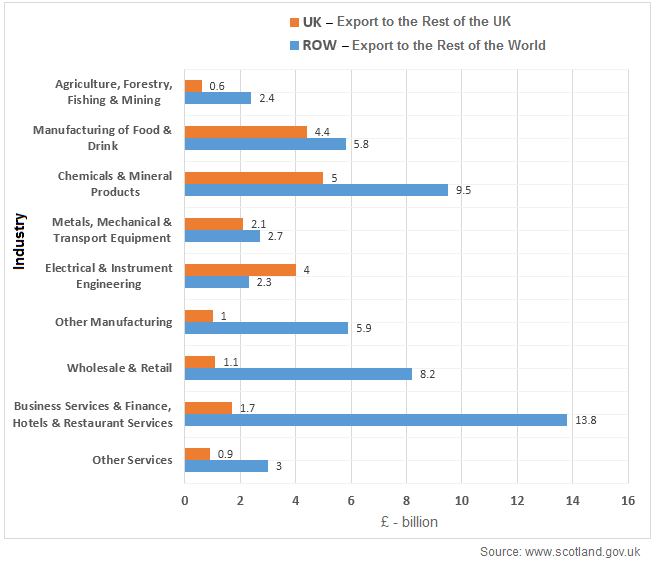 Sample Answer:
The bar graph reveals data on Scotland’s export revenue to the United Kingdom as well as rest of the world in 2014. Overall, the highest export earning for Scotland came from ‘business service including hotels’ and ‘chemical & mineral products’ while the UK was the largest market for Electrical and instrument engineering goods manufactured by Scotland.

According to the bar graph, Scotland’s total export revenue in 2014 was roughly 75 billion pound and approximately 21 billion of this revenue came from the UK. Food & drink, chemical & mineral, electrical instruments and business service brought 4.4, 5, 4 and 1.7 billion export revenue respectively from the UK. Those industries generated 5.8, 9.5, 2.3 and 13.8 billion pounds earning consequentially for Scotland in 2014 from the global export except the UK. Scotland generated the highest export figure from business service with over 15 billion pounds while the second highest came from chemical and mineral industry. Export amount from the UK in engineering industry (4 billion) exceeded the global export earning while Scotland earned the least revenue from the ‘agriculture, forestry, fishing and mining’ industries. The UK was its largest market for food, chemical and engineering products.

RSS
Nguyen Thuong Vu 2 years 8 months
The graph displays the figures for Scotland's global export in 2014, comparing the export to the United Kingdom with that of the remaining world. Data is categorized into nine different industries.

Overall, the business and finance service industry was the biggest export sectors internationally for Scotland. At the same time, electrical and instrument seemed to be their focus of export to the UK.

In detail, business and finance gathered a striking amount of 15.5 billion pounds for Scotland, with approximately one-tenth coming from the UK. The second largest industry globally was chemical and mineral products. Interestingly, this was also the major revenue source for Scotland from the rest of the UK (5 billion).

Another look at the graph suggests that exporting technical equipment brought 2.1 and 2.7 billion from the UK and the remaining parts of the world, respectively. On the other hand, these figures for agriculture were 0.6 and 2.4 billion, which were the smallest amount in all nine industries.

At 4.4 billion, food and drink gave Scotland the second largest revenue from the UK. This amount was exactly 4 times of that of the wholesale and retail industry (also from the UK).