The chart below shows the sales of handmade olive oil soaps to tourists in Turkey in 2015. 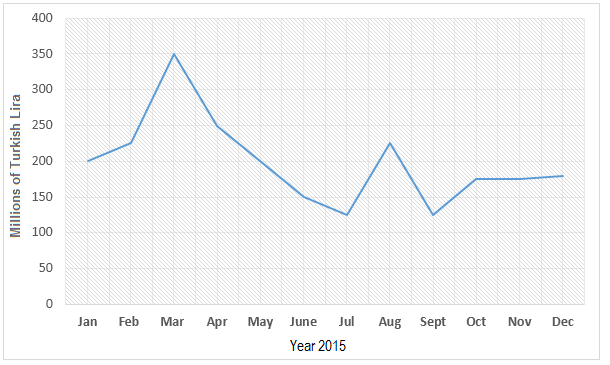 Sample Answer:
The line graph reveals data on the sales amount of handmade olive oil soaps which were sold to the tourists in Turkey in 2015. The sale amount is given in million lira. It is obvious that the highest sales were made in March 2015 while the average sales amount per month ranged from 100 to 200 million lira.

Getting back to the details, Turkish olive oil soap makers sold soaps of 200 million Lira to the visitors in January 2015 which skyrocketed to 350 million Lira in March. The sales amount nosedived in the subsequent months and the drop continued until the July when it dipped to just over 100 million sales amount. During this time each month's sale declined by 50 million lira. Sales in August went up and it recorded twice as much sales amount as it was in the last month only to decline in the next month. With a slight increase, the sales amount nearly touched the 200 million lira again in December.