The line graph below shows how much people in four countries spent on purchasing books from 1995 to 2005. 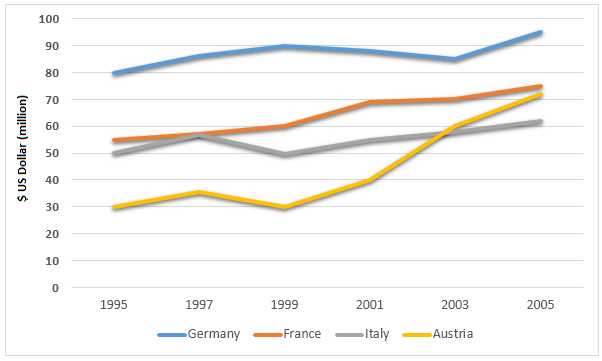 Sample Answer:
The illustration compares the amount spent on purchasing books between 1995 and 2005 by the citizens of four countries. Generally speaking, Germans spent the highest amount on books during this period and Austrian citizens’ spending went higher than Italians after 2002.

According to the line graph, Germans spent 80 million US dollar for buying books in 1995 which was significantly higher than the amount spent by other nationalities. In this year Italians and French people disbursed 50 and 55 million respectively for the same purpose. Austrian people spent less than 30 million which was lower than half of the Germans spending for books. After 2 years, spending by those nationalities for purchasing books increased. In 1999, the expenditure by Germans for books reached to 90 million while it was 60 and 50 million for French and Italian. Expenses on books for Austrian remained the same as it was in 1995. However, after 2001, Austrian people started spending more on books and this amount exceeded the money spent by Italians in 2003, finally reaching to over 60 million in 2005. A similar amount was spent by French people in this year while Italians cost for books stood at 50 million. The highest payer on books in 2005 was Germany, accounting 95 million, which was considerably higher than other nations’ spending on books.

RSS
Nguyen Thuong Vu 2 years 1 month
The provided line graph illustrates how people in Germany, France, Italy and Austria spent their money on books, throughout a 10-year period starting in 1995.

Generally speaking, the spending of Germans on books was significantly higher than that of the remaining countries. Additionally, there was a significant increase in the amount of money spent by Austrians on books.

To begin with, people in Germany spent 80 million US dollars on books in the year 1995 while these figures for Austrians, Italians and French people ranged between 30 and 55 million.

After four years, the spending habits of citizens in Austria and Italy were similar to those in 1995. Also in 1999, the expenditures of French and German citizens on books were 60 and 90 million, respectively.

There was a gradual decrease in this spending in Germany until 2003 before the figure surged to 95 million US dollars by the end of the given period. On the other hand, a steady increase can be seen in Italy as the amount of money spent became over 60 million in 2005. Spending in Austria increased more than twice, which was the most dramatic rise, and eventually surpassed 70 million.

Regarding French people, the amount of money flattened off between 2001 and 2003 but then increased to 75 million two years later. And finally, it is worth noticing that there were increasing trends in expenditure on books in all four countries.