The bar charts below show the average of annual working hours and the average duration of holidays in five European countries.

Average number of working hours per person in a year 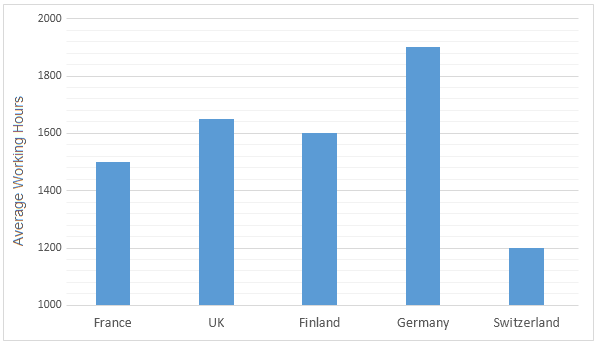 Average duration of holidays in hours per person in a year 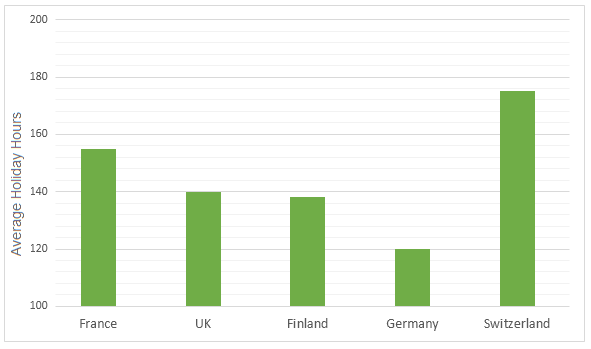 Sample Answer 1:
The line graphs compare the typical duration of office hours and holidays in a year for the working class people in five European countries, namely- France, UK, Finland, Germany and Switzerland. Overall, German employees have the longest working hours in a year but they enjoy the least duration of leaves and a reverse scenario could be observed in Switzerland.

According to the illustration, A German works for around 1900 hours in a year on an average and this working hour is higher than that of the remaining four European countries. Despite the highest working hours, Germans have the least hours as holidays which is 120. Swiss employees enjoy the highest duration of off from works which accounts for roughly 175 hours a year despite their least duration of works in offices, 1200 hours annually. English and Finnish employees work for around 1600 hours annually and they enjoy roughly 140 hours’ free time off from work. Finally, employees in France spend 1500 hours in workplaces and have more than 150 hours’ holidays. French employees have approximately a ratio of 10:1 working hours and holiday duration but this ratio is almost 19:1.2 in Germany and 12:1.75 in Switzerland.

The data in the first bar graph reveals that Germans have the highest number of office hours, around 1900 hours in a year for an employee, which is significantly higher than that of a Swiss employee. The least working hours could be observed in Switzerland which accounts for 1200 hours per person per year. An English work for over 1600 hours per year which is around 1500 and 1600 for French and Finns respectively.