The average prices per kilometre of clothing imported into the European Union from six different countries in 1993 and 2003 are shown in the bar chart below. 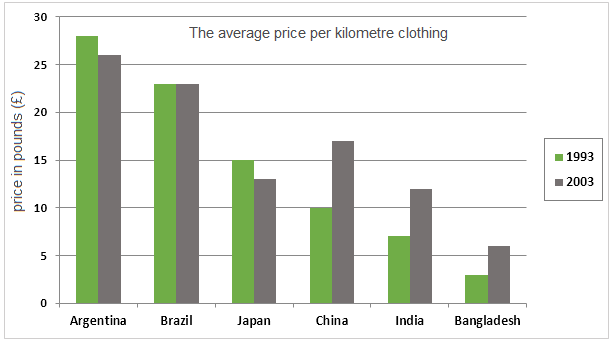 Sample Answer 1:
The column graph compares the import prices of per kilometre clothing by the European Union from six different countries in 1993 with that of 2003. Overall, the EU paid the highest amount to Argentina for garments import and lowest to Bangladesh in both years.

As is seen, the European Union paid around 28 pounds for per kilometre clothes from Argentina in 1993 and this rate was highest. After ten years, it reduced to just over 25 pounds but still, Argentina received the premier price for clothing export to the EU. The second most value paid by the EU for cloth importing from Brazil and both in 1993 and 2003 they were paid roughly 23 pounds for the one-kilometre dress. Japan received exactly 15 pounds for that in 1993 but this rate dropped to roughly 13 pounds after 10 years. China was paid 10 pounds for each kilo costume the EU exported in 1993 and the price hiked to about 17 pounds in just ten years. The EU purchased Indian garments items for approximately 7 pounds a kilo in 1993 and the price doubled in a decade. The least amount for per kilo clothing was paid to Bangladesh by the EU in both of the years but the price went high in 2003 and was 6 pounds compared to half of that in a decade earlier.


Sample Answer 2:
The bar graph shows average price the European Union (EU) spent for per kilometre clothing import from six different years in 1993 and 2003. It is obvious that the EU paid the highest amount for each kilometre costume to Argentina.

According to the illustration, the EU spent the highest amount for clothing import from Argentina which was approximately 28 pounds per kilometre in 1993. This rate was significantly higher; almost 9 times higher than the rate it gave to Bangladesh. The second and third highest rates were given to Brazil and Japan, roughly 23 and 15 pounds respectively. China and India got less than that and their rate was higher than the import rate from Bangladesh. The latter received only around 3 pound per kilo which was almost three times less than the rate paid to Japan.

The rate went higher in 2003 for China, India and Bangladesh who were the least paid countries in a decade earlier. The price for costume import from Brazil remained unchanged while slightly declined for Argentina and Japan. Despite the price changes, Argentina and Brazil were still highly paid than that of India and Bangladesh while China’s price went as high as 17 pounds, almost double than that of 1993’s rate.

RSS
Jessica Nadal 1 year 9 months
The bar graph depicts the average prices per kilometre of clothing that the European Union (EU) paid to six countries between 1993 and 2003. Overall, for both years, it is apparent that the EU imported clothing garments from Argentina at the highest price while it was the lowest from Bangladesh.

In 1993, the EU paid the highest amount for per kilometre clothing to Argentina, which was around 28 pounds. This was followed by the payment made to Brazil, 23 pounds per kilometre. In contrast, the prices paid to the other four countries were lower than that. The prices of clothing imported from China and Japan were just 10 and 15 pounds per km, respectively. The average price from India was much lower, 7 pounds, and the cheapest price for clothing was from Bangladesh, which was at only 2.50 pounds.

By 2003, the price of clothing imported from Argentina slightly decreased by 2 pounds while Brazil's figure remained steady. Also, the price of EU's imported clothing from Japan declined. However, prices in the other three countries rose by a substantial amount. China's clothing price dramatically moved upward to 17 pounds as well as in India, it rose to 12 pounds. The lowest figure in 2003 was from Bangladesh which only accounted for 6 pounds per kilometre.

Justin Flom 2 years 6 months
Hey, in both the answers, where is the overall paragraph?

Cliff4God 2 years 10 months
Secondly, in the sample answer 2, the year (1993) was not specified. Finally, from the graph, I think Argentina received about 10times (not 7 times) higher than the rate Bangladesh got from the EU in 1993. Need clarification on this. Thanks.

Cliff4God 2 years 10 months
This is the best website I have ever come across since my IELTS world. As regards sample answer 1, the details were lumped in only one paragraph. Hope it won't reduce the band score?

Chetna 3 years 8 months
The bar chart provides information about the average cost per kilometre of clothing spent in pounds by the European Union on clothing import from Argentina, Brazil, Japan, China, India and Bangladesh in 1993 and 2003.

It can be clearly seen that the EU had paid the highest amount of money to Argentina, whereas the lowest amount was being paid to Bangladesh, in both the years.

According to the bar chart, Argentina had the highest clothing price in terms of selling them to the EU nations, approximately 28 pounds in 1993, which noticed a slight drop in 2003 to just above 25 pounds. But still, it remained at the pinnacle of price earned from their clothing making. The second and the third highest amount was paid to Brazil and Japan, roughly 23 and 15 pounds, respectively. China, India and Bangladesh received less price (less than 10 pounds) compared to the other three countries in 1993.

The average cost went up for India, China and Bangladesh in 2003, compared to a decade back. Even though there was a slight drop of approximately 2 pounds in the cost of clothing for Argentina and Japan, they still stood the first and the second places respectively. China's per kilometre costumes export almost doubled in 2003, while it remained unchanged for Brazil.

Has clothes been imported to EU or by EU?

Saloni 4 years 2 months
Has clothes been imported to EU or by EU?

Zeycan 4 years 4 months
Thank you for this website and all these examples. Can it be used "AMOUNT" instead of "rate" in the first sentence of the second paragraph? (As is seen, the European Union paid around 28 pounds for per kilometre clothes from Argentina in 1993 and this RATE/AMOUNT was the highest.)