The chart below shows how frequently people in the USA ate at fast-food shops between 2003 and 2013. 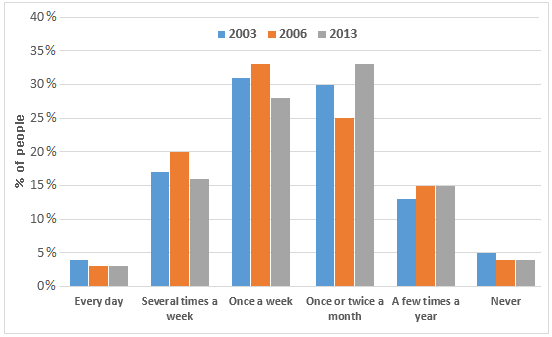 Model Answer:
The diagram outlines the frequency of having fast food meals by Americans at restaurants from 2003 to 2013. Generally speaking, almost half of the Americans ate fast food in a bistro either once or more than a few times a week between 2003 and 2013. It is worth noticing that more Americans chose not to eat junk food as frequently as they used to do so in the past.

As the diagram suggests, almost one of twenty Americans ate junk food daily at a restaurant in 2003 while this rate slightly decreased over the period. Interestingly around the same percentage of US citizens never ate at such restaurants, as the data suggests. Again, around 17% of Americans ate at fast-food eateries several times a week and the ratio of such people increased in 2006 before it dropped to just over 15% in 2013. Many Americans preferred eating fast food once a week and they constituted almost one third. Their ratio, however, fell by few percentages over time. A similar percentage of Americans had fast food meals once in a month and their ratio went higher. People who rarely dined at a fast-food café accounted for around 15% of the total. The increase in the last two categories suggests that many Americans who more frequently ate at fast food shops had stopped doing so after a decade.

RSS
Musti 3 years 2 months
Your English is exemplary. However, I advise you to be cautious when looking for synonyms as the words you have used to replace. Fast food restaurant is not very accurate (Bistro, cafe, eating junk food). Best of luck.

Chris 3 years 6 months
Can you please tell me which IELTS book I can buy to see the Cambridge notes about this question?