The chart below shows the type of transports young people in four countries prefer to use. 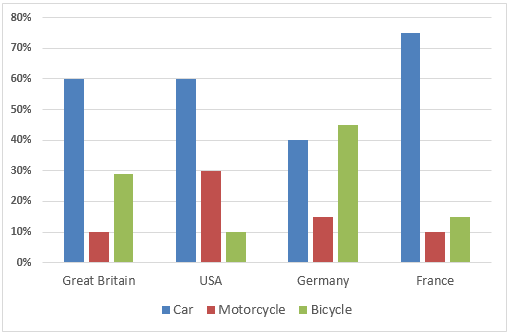 Model Answer 1:
The bar graph outlines the types of transportation the young generation in Grain Britain, USA, Germany and France prefer to use to commute.

Overall, automobiles are the most preferred vehicles for commuting in these countries among the youths except for Germany where the highest proportion of youths prefer to travel by their bicycles.

The illustration shows that three-quarters of French youths use a car while a few of them prefer two-wheelers, which accounts for nearly 15% of them. The majority of young Americans choose an automobile for commuting whereas half of these young people travel by motorbike. In Great Britain, under 30% of youngsters travel by bicycle and double of this proportion travel through on autos.

Furthermore, the preference of the German youngs is very different from those of others, as more young people like to travel using a bicycle (about 45%) instead of a car (40%). The percentage of young motorcyclists is the same for France and Great Britain (exactly 10%) while this ratio is slightly higher for Germans, which is around 15%.


Model Answer 2:
The column graph outlines the transportation preference among the young people in Great Britain, USA, Germany and France. As an overall trend, the young generation, except in Germany, mainly like to use the car as a mean of commuting and this ratio is the highest in France.

To illustrate, six out of ten British youth favour cars to travel. Less than one-third of them use bicycles and only one of ten youth in the UK pick motorbike to commute. A similar ratio of US adolescents (precise 60%) prefers cars but their preference for motorbikes is higher than that of the UK, 30% to be exact. However, less percentage of American youngsters prefers riding bicycles, only one out of ten. Germany shows an interesting trend where almost half of the adolescents like to ride a bicycle, a trend uncommon in other countries. 40% of them choose cars as their transportation and the rest of them inclined to use motorbikes. Finally, the highest percentage of car-loving youngs are located in France, where around 2 out of 3 adolescent fancy cars over other vehicles. Around 10% of French youth use bicycle and a similar percentage ride on motorized bikes.