The graphs below show the global robotics market during 2000 and 2025 based on sectors. 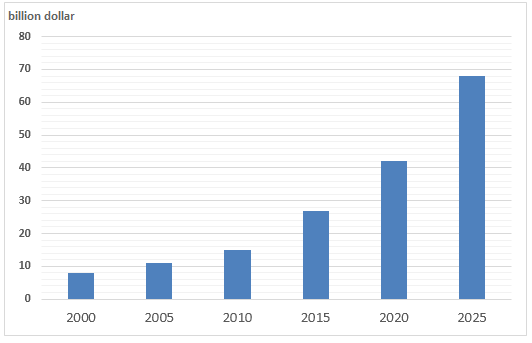 Sample Answer:
The diagrams give data on the global market of robotics in billion dollars from 2000 and give predictions until the year 2025. Overall, the market for robotics will significantly progress in the coming years and its industrial use will be predominant.

According to the bar chart, worldwide robotics business in 2000 was less than 10 billion dollars and in the next decade, it almost trebled. The outreach of robotics in the global market is predicted to go higher than 40 billion in 2020. Finally, in 2025, this is estimated to jump to approximately 70 billion dollars.

RSS
Jason 5 months 1 day
The supplied graphs compare the international robotics market since 2000 with anticipation until 2025 and divide the size of the market into 4 sectors (measurements are in billion dollars).

As can be seen, the robotics market will significantly experience advancement, especially in the anticipated future, while industrial use will be the leading market.

As the graph suggests, the international market for robotics in 2000 was less than 10 billion. In the next decade, this number almost trebled and ultimately ended above 40 billion in 2020. This growth will highly likely continue to surge by almost 70 billion by 2025.

As the table noted, personal use of robotics was fully ignored in 2000, but it doubled in the next decade and finally will hit the 9 billion dollars market by the year 2025. The commercial sector with 3 billion more than personal use in 2020, held 10 billion dollars in the market and will rocket to 16 billion in the future. In addition, the military started with 2 billion on the table and managed to reach 10 billion until now it is expected that this trend will peak to 15 billion. Ultimately, the industrial market with 5 billion in the first decade won the chart in 2010 and will be predominant till 2025 among all sectors.