The graph below shows the number of enquiries to tourist information office made by telephone, letter/email, and in person from January 2001 to June 2001. 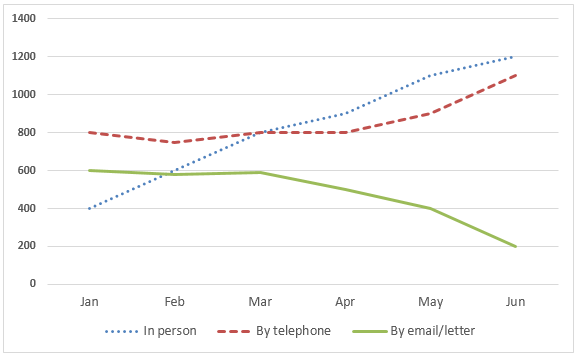 Sample Answer:
The line graph outlines the number of queries a tourist information centre received during the first half of 2001 via phone calls and letter/electronic mails as well as questionings made by people in person. Generally speaking, people started making more enquiries in person after March 2001 while email and letter query dropped.

As the graph suggests, the tourist information office received around 1800 enquiries from people in January 2001 of which the maximum came through phones. Against 800 phone queries at that time they got 600 emails and letters and 400 in-person visits from people regarding information. The number of emails or postal queries dropped over the period and in June the office received only 200 such queries, one-third than that of starting of the year. Interestingly, more people visited the office to log their questions and this number reached to 1200 in the middle of the year. Though telephone enquiries were predominant at the beginning of the year, they remained constant between January and April. Afterwards, the telephone enquiries got higher and reached to about 1100 in June 2001, slightly lower than the number of enquiries made in person. The total number of such prove made by people to this tourist office increased to nearly 2500, almost 500 more enquiries than that of January.