The graph below shows total internet users in Vietnam from 2003 to the second quarter 2012. 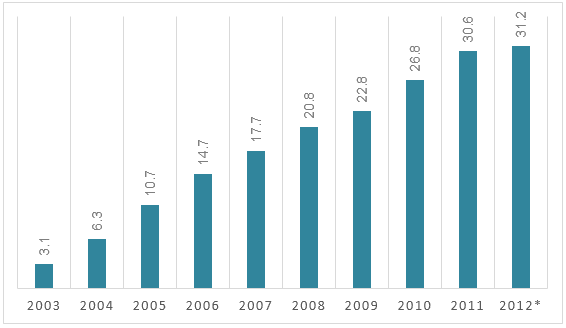 Sample Answer:
The bar chart delineates how the internet users in Vietnam developed from the beginning of 2003 to the second quarter of 2012 according to the data provided by the Vietnam Internet Network Information Center. As is obvious, the internet subscribers in Vietnam increased steadily throughout the period.

According to the diagram, 3.1 million Vietnamese used the internet in 2003 which more than doubled in just 1 year. After another year, total internet users in Vietnam exceeded 10 million and in 2006 another 4 million new users emerged. During 2006 and 2008, the number of such netizens (people who are connected to the internet) doubled, accounting somewhat 21 million total users. It is worth noticing that the number of new internet subscribers kept on increasing in Vietnam throughout the period and in 2011, their number went as high as 30 million, ten times higher than that of 2003. During the second quarter of 2012, the Vietnamese internet subscribers reached a record high, 31.2 million with 0.6 million new users in just six months.

RSS
Arslan Mehar 2 years 6 months
This is a very good method for the preparation of IELTS test.