The graph below shows the Gross Domestic Products (GDP) in four selected countries between 2010 and 2015. 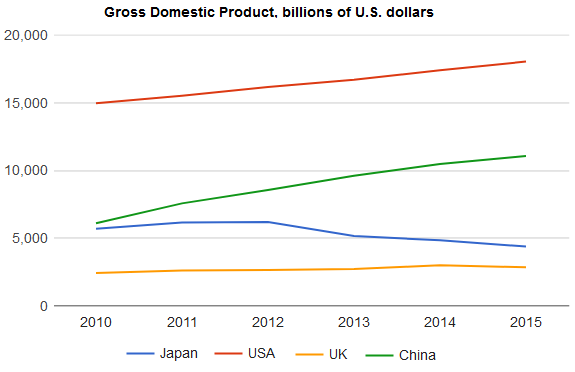 Sample Answer:
The line graph compares the Gross Domestic Product (GDP) in four countries and delineates how GDP in these countries changed between 2010 and 2015. The GDP is measured in billions of US dollar. As can be seen, the USA had the largest GDP and in China, the GDP growth was remarkable.

It is worth noticing that, GDP in the USA steadily grew and reached to over 18000 billion dollars in 2015, 3000 billion higher than that of 2010. USA’s GDP was higher than any other country between 2010 and 2015. However, the GDP growth in China was most remarkable as it almost doubled in 5 years, reaching almost 12000 billion USD. As an exception, GDP in Japan actually declined while it remained almost the same in the UK in five years.