The two pie charts below show some employment patterns in Great Britain in 1992. 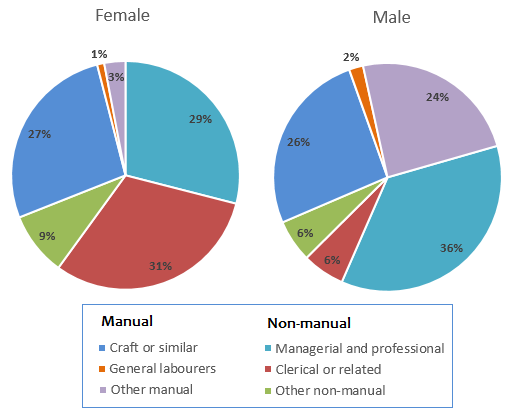 Model Answer:
The pie charts outline employment scenario of British males and females in six job sectors in 1992. It is obvious that manual jobs were predominantly done by males whereas a higher percentage of females did clerical jobs. Moreover, managerial and craft related jobs were engaged by a higher proportion of both genders.

As the illustration indicates, more percentages of British males worked in manual sectors, except in craft-related industries, compared to their female counterparts. For instance, 2% general labourers in Great Britain were men while the female labourers’ ratio was half of that. Moreover, 24% males worked in numerous other manual jobs while this was only 3% for females. Nevertheless, 27% females in craft-related industries marginally exceeded the ratio of males in the same sector.

Looking further into the data, non-manual professions included managerial & professional, clerical and other non-manual jobs. Interestingly, employment rates of females in clerical was five times higher than that of males. This is the job category that many females (31%) we engaged in. Besides, over one-third males were in managerial and professional jobs while almost 30% females were in these positions as well.