IELTS graph 288 - Sales of trainers made by a sportswear company

The graph below shows the percentage sales of trainers made by a sportswear company in one year. 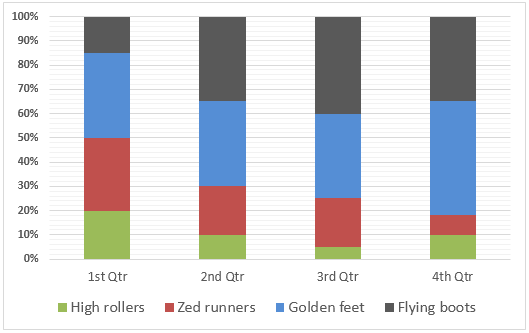 * The Flying Boots trainers were launched at the beginning of that year.

Model Answer:
The column graph compares sales volume of trainer shoes in a year manufactures by a company. Overall, Flying boots, a trainer footwear type, that was launched at the starting of the year became popular while Golden feet dominated the market share in terms of its sale ratio.

As is presented in the illustration, the sportswear company sold four types of trainer footwear throughout the year and the first quarter was dominated by the Golden feet and Zed runner shoes as they each made approximately one-third of the total sales. The newly launched trainers Flying boots brought around 15% businesses for this sportswear company. During the second quarter, the sales proportion of Flying boots increased to 32% while sales of Golden feet made one-third. Sales quota of High roller shrank considerably and the newly launched brand made the highest sale during the third quarter. With a declining sales ratio throughout the third quarter, Golden feet’s demand raised in the last quarter of the year while Flying boots made the second largest sales. Interestingly, other two trainer shoe models contributed to less than 20% sales of this company in the last quarter.

RSS
Nguyen Thuong Vu 1 year 9 months
The given bar chart illustrates how a sportswear company sold four different types of trainers throughout a year. As can be seen, the products 'Flying boots' and 'Golden feet' were more popular than the remaining two - 'Zed runners' and 'High rollers'.

To begin with, Flying boot trainers, which were launched right in the year's first quarter, immediately represented 15% sales. Sales of Golden boots at the same time were more than double those of Flying boots and were the largest in that quarter. The popularity of Golden feet trainers remained the same in the next 6 months, before rising dramatically to almost 50% by the end of the year.

The figure regarding Flying boots went as high as 40% in the third quarter, before reducing by 5% three months later. As for the products Zed runners and High rollers, they accounted for a total of 50% in the first quarter, but by the end of the year, they represented just under one-fifth. It is worth noticing that after a year, sales of High rollers became exactly a half, while those of Zed runners saw a dramatic decline in the final quarter - down from 30% at the year's beginning to less than 10% at the year's ending.

Overall, 'Golden feet' dominated the market throughout the year. However, 'Flying Boots' trainer, which was launched at the beginning of the year, gradually witnessed an increase in popularity.

In details, in the 1st quarter, the sale of shoes was dominated by Golden feet and Zed runners as roughly 30% and 35% of these types of footwears were chosen by the customers respectively. Flying boots, which debuted this year only, recorded 15% share of the total sales volume. However, this type of trainers slowly gained popularity over the year and recorded the highest sales in the 3rd quarter (approximately 40%).

Furthermore, although 'High rollers' was the third highest-selling product of the company in the 1st quarter, its demand significantly plunged in the following months and touched the lowest sale in the 3rd quarter (slightly more than 5%) before observing a nominal increase of 5% by the end of the year. A similar pattern could be observed for Zed runners. From being the second-most popular trainer shoes, it dropped to less than 10% in the final leg. Also, Golden feet’s demand increased significantly in the last quarter and this brand contributed roughly 50% of the total sales amount.

Note: It would be great if you kindly evaluate my essay. Thank you so much in advance.