The pie chart below shows the results of a survey of the causes of poor learning outcomes in schools in a particular country in 2011. 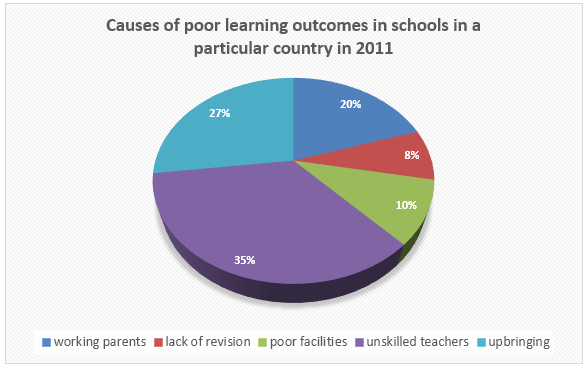 Model Answer 1:
The pie chart presents a survey result that outlines why pupils in schools poorly performed in a country in 2011. Categorically speaking, inexpert teachers and family issues were the main reasons they had wretched outcomes in learning.

In short, unskilled educators, family issues like working parents, improper upbringing or children, insufficient facilities and lack of study and revision were the main reasons schoolgoers' learning, in this country, was not up to the mark.

As the data suggests, unskilled masters in schools were the primary ground for young students’ inadequate performance as 35% attribution was made to unskilled teachers. The second most protuberant reason, denoted as 27%, was indicated towards the upbringing of the children which is related to the family issue. Working-class parents were attributed to influence students learning negatively as 20% of poor learning results was linked to the bad performance of pupils in schools. Inadequate facilities and lack of revision were pointed out to cause 10 and 8 percentages of this unsatisfactory performance based on the outcomes of the survey.


Model Answer 2:
The pie graph illustrates why students in a country had substandard results in the year 2011. Overall, there were five main reasons, and unskilled teachers were to take the most blame.

As the diagram suggests, 35% of students did not have good learning outcomes because of some teachers' lack of experience. On the other hand, family issues accounted for the second-highest percentage of poor learning in school, which was slightly over a quarter. Additionally, precisely one-fifth of students poor learning had been due to working parents.

The figure regarding inadequate facilities stood at 10%, which was slightly higher than that when it came to students' revision problems. It is worth noticing that there was a difference of 27% between the most common cause - unskilled teachers, and the least - lack of revision. Besides, the former was more than four times when compared with the latter.

Finally, the two main reasons made up more than 60% of poor learning problems while the least popular two reasons only represented lower than 20%.

RSS
Ali 2 years 4 months
The tense must be in the past for this pie chart. A lot of fancy words that do not make sense in the context used. Lack of comparison...