The table below shows average hours and minutes spent by UK males and females on different daily activities. 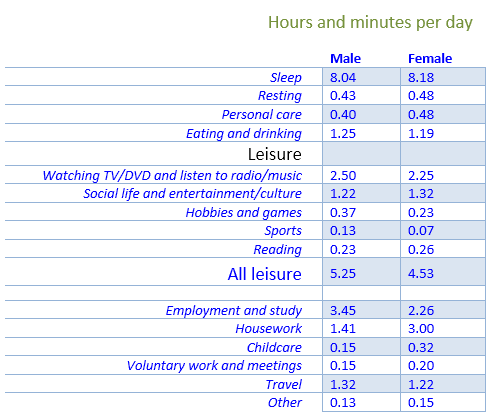 Model Answer:
The table data illustrates how much time an average British male and female spent on various daily activities. It is apparently seen that sleeping consume the highest duration of a day while leisure and professional activities involve a notable portion of their time. Moreover, females do more house works and childrearing than males do on a daily basis.

As can be seen, an average British male sleeps and rests just over 8 hours a day while female’s sleeping and resting time is slightly higher than that. A similar pattern could be observed on the duration of personal care by British. Further, a male takes an hour and 25 minutes to enjoy their meals while it is 6 minutes shorter for their counterparts.

Looking further, men spend 5:25 hours to enjoy their leisure activities while it is around 28 minutes less for females. Watching TV and enjoying music is a popular pastime activity among British as they spend over half of their leisure times on that. They spend less time reading or participating in sports than they do for watching TV and listening to music.

Men spend 3 hours and 45 minutes a day for professional and academic purposes, more than females involvement on this. However, females devote more time for household works, childcare and voluntary works, roughly 4 hours, compared to almost half of that by men. Finally, British travel for nearly 1 and half hour daily and men employ slightly more time doing it than that of females.

Overall, the British, irrespective of gender, spent the most time sleeping. Also, while men spent significantly more time on employment and study than women, the trend was the opposite for housework.

It is noticeable that both the men and women spent the most amount of time, at just over 8 hours, sleeping. This was followed by spare time activities for which they spent about 5 hours. Among the leisure activities, both the genders spent the most on “watching TV/DVD and listening to music" - at 2 hours 50 minutes and 2 hours 25 minutes respectively.

Meanwhile, men spent considerably more on jobs and studies than women at 3 hours 45 minutes to only 2 hours 26 minutes accounting for a gender-wise difference of 79 minutes. By contrast, women spent 79 minutes more than men on housework at 1 hour 45 minutes to 3 hours. Besides, both genders also spent over 1 hour on “eating and drinking” and travelling.