The bar charts below provide information about honey production and honey producing colonies in the five American states in 2006. 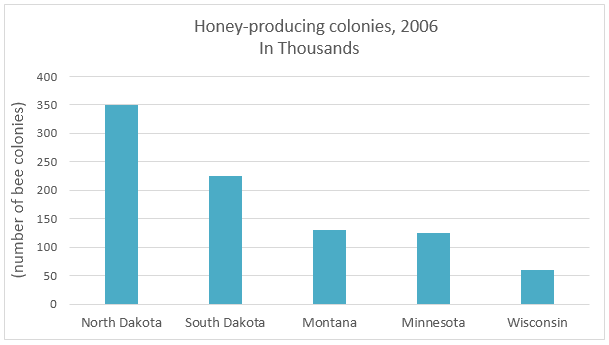 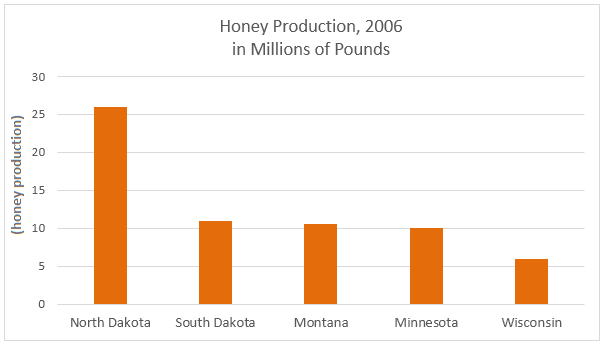 The bar chart provides data regarding the number of bee colonies in five American states in 2006. The data further compares the capacity of honey production of the same colonies in millions of pounds.

According to the data, in 2006, 350 thousand bee colonies were recorded in North Dakota. Consequently, most of the honey came from this state, more than 25 million pounds. Surprisingly, South Dakota’s honey production was significantly low (roughly 10 million pounds) even though this state hosted the second-highest bee colonies, approximately 225 thousand.

Montana, which had approximately 130 thousands of bee provinces, was slightly higher than that of Minnesota’s. In terms of honey production, these two states generated an almost equal amount of honey in 2006, 10 million pounds each. Besides, Wisconsin registered the lowest number of bee communities, slightly above 50 thousand and produced around 5 million pounds honey, the least among all.

The diagrams delineate how many beehives were there in five US states in 2006 and how much honey these states assembled in the same year. As a general trend, the higher the number of honey-yielding bee colonies in a state, the higher honey it produced and North Dakota was on the top of the list while Wisconsin on the bottom.

It is conspicuous that North Dakota had the highest bee colonies in 2006 which accounted for 350 thousand. From these swarm hives, this state collected the highest amount of honey, over 25 million pounds. Interestingly, South Dakota had the second-largest number of bee colonies, roughly 225 thousand but its honey production was somewhat similar to that of Montana and Minnesota, each of which had approximately 130 thousand beehives. Wisconsin state had just over 50 thousand bee colonies, the lowest among the given states, and its honey production was the least as well, somewhat more than 5 million pounds.

RSS
Kanika Malik 3 years 4 months
Hello, could you please assess this description also? Feedback is appreciated. Thank you in advance.

The given charts depict the amount of honey produced (in millions of Pounds) and the number of honey manufacturing colonies in five US states in the year 2006.

Following a similar trend, North Dakota was the highest honey-producing state in the USA with approximately 25 millions of pounds of honey manufactured in the year 2006. Although, South Dakota was the second highest producer, Montana, and Minnesota were also nearly the same as South Dakota. However, Wisconsin contributed the least by manufacturing nearly 5 million pounds worth of honey in the same year.

We are really glad that you have shared your writing sample with us. As you can notice, we have modified your sample answer to make it more useful to others. Two other contributors have already mentioned important tips and we would like to add that you need to mention some figures and numbers to show the changing trends and data comparison. In your original writing, you did not mention the number of beehives and the amount of honey production. You DO NOT need to mention every single number and amount, but not mentioning any number and figure at all is not recommended. Best wishes from us. Take care and have a great day. N.B. Your original writing secured 5.5 band score in our assessment.

Flora 3 years 8 months
Hi Parul Bissa, Thank you for sharing your sample answer. In my opinion, it's a band 6.5 level answer. To enhance your score, you need to use more synonyms. You have used 'bee colonies' several times. You could have used bee hives instead! Also, you did not mention that honey production was somewhat related to the number of bee colonies except in South Dakota. However, as the first-timer, your effort was impressive. Carry on!

Parul 3 years 8 months
Highly appreciate your valuable comment Manickam. Thank you, I am working on improving it. Good day!

Manickam 3 years 8 months
Your first attempt is not bad. However, you have to use some synonyms and introduce more sentence variation to secure a band score of 7.0+.

Parul Bissa 3 years 8 months
This is my first try to write any graph, I need your genuine reviews.

The combination of two bar graphs enumerates data about the number of bee colonies and honey production in 5 different American states measured in thousands and millions of pounds respectively. The samples are collected and analyzed for the year 2006.