IELTS graph 302 - Access to refrigerator, electricity and water in Ghana

The graph below shows the percentage of households, grouped by poverty, on the basis of access to refrigerator, electricity and water in Ghana for the year 1991/1992 to 1998/1999. 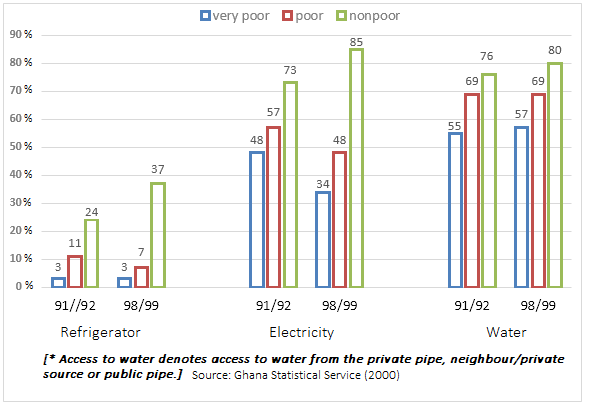 Model Answer:
The diagram outlines how the electricity, refrigerator and water access to Ghanaians changed in seven years. The data was published by the Ghana Statistics Service in 2000 and admittance to these conveniences is categorized based on the economic conditions of Ghanaians. Overall, solvent people had far better access to these facilities while the availability of electricity and fridges deteriorated for poor Ghanaians.

As the bar graph suggests, only 3% meagre citizens in Ghana had access to refrigerators in 1991/1992 despite 48% of them had electricity. Access to electrical energy for very poor declined by 14% after 7 years. However, water access was granted for over half of the scanty people in 91/92 fiscal year while it slightly improved afterwards.

Poor Ghanaians’ access to electricity was somewhat better than very poor citizens but in 7 years the scenario deteriorated. Their access to refrigerators was 11% in 1991/92 which reduced by 5% in 1998/99. Moreover, around seven in ten poor citizens received water facilities which remained constant in 98/99.

Finally, affluent Ghanaians had better access to these amenities as 85% of them had electric power in 1998/99 compared to 34% destitute Ghanaians access to this facility. Eight out of ten rich people had access to water and their admittance to these resources augmented over the period, unlike poor citizens.