The pie charts below show the coffee production, coffee consumption and the profit distribution around the world. 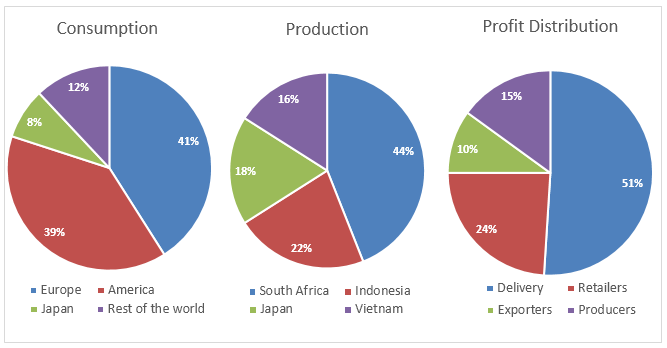 Model Answer 1:
The pie charts correlate global coffee consumptions, coffee production in four countries as well as profit distributions among business segments related to coffee. It is obvious that Europeans and Americans are the primary coffee consumers while South Africa is the largest coffee producer among the given countries. Moreover, companies that deliver coffee make more profit than other organisations that do business in this industry.

According to the illustration, Europeans drink more than 40% coffee which is the highest ratio of coffee intake in the world. America consumes 2% less than that while Japanese dissipate only 8% of global coffee. Rest of the world merely consumes 12% coffee.

South Africa contributes to 44% coffee production which is the highest. Indonesia harvests 22% coffee, exactly half of the South African coffee assembly. Japan and Vietnam make 18% and 16% coffee respectively. Interestingly, despite Japan’s being one of the top countries to produce coffee, its consumption ratio is comparatively lower.

Finally, more than half of the profit from coffee is made by the delivery industries. Coffee retailers’ share of profit is roughly a quarter while coffee producers and exporters make 10% and 15% profits respectively.

Overall, Europeans and Americans drink the highest amount of coffee while South Africa is the biggest producer. Additionally, the coffee delivery service is the most profitable business among those compared.

To begin with, citizens of Europe and America consume coffee four times as much as the rest of the world. Japan, whose production accounts for 18% internationally, only consume a mere 8% of global coffee.

It is worth noticing that South Africa produces 44% of the coffee (more than anywhere else), which is exactly double than the coffee production in Indonesia - the country that makes the second-largest coffee. Along with South Africa, Indonesia and Japan, Vietnam also harvests coffee and the amount is 16%.

Regarding profit distribution, it can be seen that more than half of it goes to the coffee delivery industry. Retailers get approximately a quarter while the figure for coffee producers' profit is only 15 per cent. The remaining 10 per cent is what exporters receive.

RSS
Pam 3 years 8 months
There are some grammatical errors. In the following lines - (Interestingly, Japan...)

Nguyen Thuong Vu 3 years
No, there are not.

Harman Bedi 4 years 6 months
Can we explain this graph in past tense?

Deep 3 years 7 months
If there is no year given.