The tables below provide information about the consumption and production of potatoes in five parts of the world in 2006. 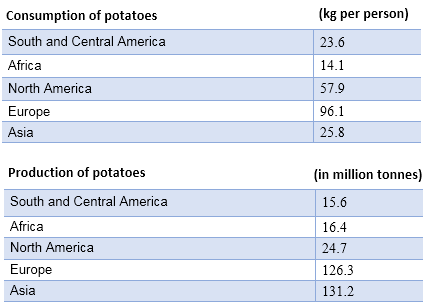 Model Answer 1:
The table data provides information on potato consumption and production in different parts of the world in 2006. Overall, average potato intake in Europe was the highest while Asia and Europe were the major potato producers in 2006.

Asian countries produced over 131 million tonnes potato in 2006 which was significantly higher than the potato growth in Africa and America. Europe’s potato harvesting was the second largest, approximately 5 million tonnes less than that of Asia. It is worth noticing that Asia and Europe were the principal potato growers in 2006.

Sample Answer 2:
The table data illustrates per person potato consumption and total production of this crop in five different regions in the world- South and Central America, Africa, North America, Europe, and Asia, in 2016. According to the information provided, Europeans ate more potatoes than the citizens of other regions on an average and Asia harvested the largest quantity of potatoes in 2016.

In details, Europeans were the chief consumers of potatoes in 2006 as each European ate 96.1 kilograms potatoes. Then, North America and Asia followed the second and the third highest consumer list of this crop, 57.9 and 25.8 kg per person intake respectively. It is interesting to note that an average European consumed almost the double quantity of potatoes than a North American and almost four times higher than that of an Asian citizen. The consumption in Africa was the least, nearly 14 kg per person while it was 23.6 kg in South and Central America.

Furthermore, Asia produced the highest quantity of potatoes 131.2 million tonnes despite their lower consumption rate. Europe grew over 126 million tonnes potato and these two regions were the main potato producers in 2006.

RSS
Motiram Sijapati 4 years 6 months
This format of writing is precise and can help the learners without more efforts. Good writing reflects simple words and combination of both cohesion and coherence. I hope to receive similar samples in the upcoming days, too.