The chart below shows the top ten countries with the highest spending on travel in 2014.

Consumer Spending on Travel (US $ Billion) 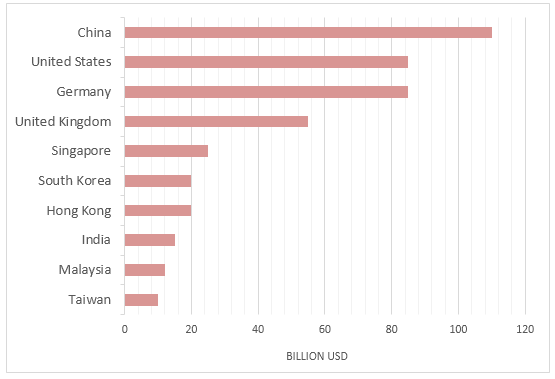 Model Answer:
The bar chart outlines the top ten countries which made the highest travel expenditure in 2014 and it also compares how much these countries spent on travel in the same year. The data was collected from UNWTO. Overall, China stood at the top of the list with the highest spending while Taiwan proclaimed the tenth position.

As the diagram suggests, China spent almost 110 billion US dollar in 2014 for travel while the US and Germany each with its nearly 85 billion spending attained at the second position in this list. The UK spent roughly 55 billion, less than half of China, for travel and the UK's spending for travel was more than double than that of Singapore. The travel spending by South Korea and Hong Kong was a tie and they each spend 20 billion USD in 2014. India's spending was just over 15 billion while Malaysia and Taiwan stood at the bottom two positions in the list with around 10-12 billion spending for the same.

RSS
Amrit 4 months 11 days
The graph shows the travel expenditures by consumers across various countries in the year 2014. The data indicates that China had the highest consumer spending on travel amongst the countries compared, and Taiwan spent the least.

To begin with, China spent 110 billion USD in 2014. The USA consumers spent 85 billion USD on travel and ranked Second after China with a travel expenditure gap of almost 25 billion USD. German consumers disbursed at par with those of the USA, which is why Germany ranked at the 3rd position, while the UK ranked 4th with 55 billion USD spending in this year in travel. The other 6 countries i.e. Singapore, South Korea, Hong Kong, India, Malaysia, and Taiwan together spend just 105 billion USD, which was 5 billion USD lower than the spending just by China.

As per the graph, the USA, Germany, and the UK were the top contributors when it came to consumer spending on travel in 2014. On the contrary, Taiwan, Malaysia, and India stood at the bottom of the list.

The given bar graph lists the top ten countries in terms of their travel-related spending in 2014. It also shows the amount of money spent by travellers in those countries in the same year.

Generally speaking, China was on the top of the list while the US and Germany were in the second and thirst positions respectively.

In details, China, with its approximately 110 billion USD spending in 2014 ranked at the top of the list of top-ten consumer spending countries in the world for the year 2014. Thereupon, the United States and Germany stood at the second the third positions with roughly 85 billion dollar spending. However, it is noticeable that, even though the United Kingdom was in fourth place, it spent only 58 billion dollar, which was nearly half of Chinese spending. Singapore, South Korea, and Hong Kong's spending on travel were nearly 20 billion USD in this year. Indian expenditure was somewhat more than that of Malaysia and Taiwan. Indian spent almost 17 billion which was 7 billion hither than Taiwan. Taiwan stood at the last position of the list with its 10 million spendings.

Nguyem Thuong Vu 2 years 4 months
The given bar chart displays the amount of money spent on travelling by 10 top countries in 2014. Units are measured in billion US dollars.

Overall, China and Taiwan were the two countries that had the highest and lowest expenditure in travelling while Malaysia and Taiwan were at the bottom of the list. More specific information will be summarized below.

As mentioned, China had the largest figure of 110 billion in 2014 when it came to spending by residents to tour different countries. The US and Germany were next on the list, with their amount of approximate costs being over 80 billion each. Additionally, the figure of the UK was 55 billion in this year, about 2-5 times than those of the six remaining countries mentioned. And interestingly, people from Korea and Hong Kong spent the same amount - 20 million. The figure of Taiwan, the country at the bottom of the list, was just over 10 billion.

Patrick 4 years 1 month
Do we need to mention the data source in the description?

Hardith 1 year 11 months
It's not mandatory. But there is no harm if you mention the data source. It actually makes your report complete.