IELTS graph 317 - Share of the UK and Australian cinema market

Chart A: Films screened in the UK and Australia, 2001. 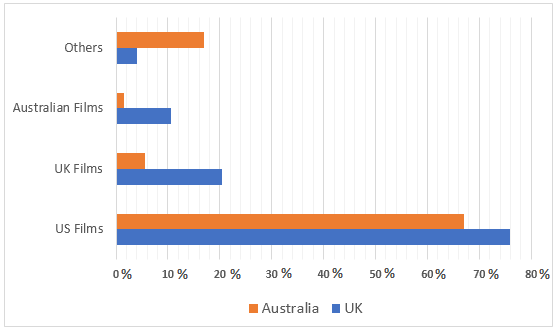 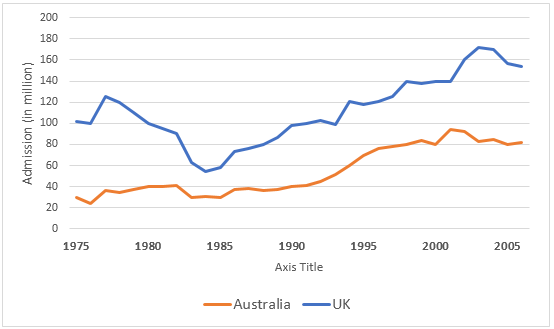 The bar chart presents data on the origin of films which were screened in Australia and the UK in 2001 while the line graph compares the number of cinema attendants in these two countries between 1976 and 2006.

Overall, Australian and Britsh theatres were dominated by American movies during the period, and more British went to movie theatres than their Australian counterparts between 1976 and 2005.

As the data suggests, more than 75% movies that were released in the UK theatres in 2001 were produced in the USA while 20% were locally made. Besides, almost one in ten movies screened in the UK was produced in Australia. A similar movie screening trend could be observed in Australia in this year where American movies commanded the theatres with a 65% ratio. Australians could watch fewer UK-made movies as only one in twenty British films made it to Australian halls. Interestingly, locally produced films in Australia were ignorable in percentage - as their screening ratio suggests.

It is obvious that more Brits enjoyed cinemas in a theatre than Australians did between 1976 and 2005. In 1975, over 100 million British watched movies in halls while this was just around 30 million in Australia. With some fluctuations, Australian movie-goers' number reached over 80 million after 3 decades. On the contrary, British cinema attendees dropped from 1977 to 1984, but afterwards steadily went up with some minor vacillations. After 30 years, almost 160 million British went to cinema halls- almost double than that of Australians.

RSS
Rezvi Kaysar 2 years 9 months
It's very helpful for me.