The table below gives information about changes in modes of travel in England between 1985 and 2000.

Describe the information in the table and make comparisons where appropriate.

Average distance in miles travelled per person per year 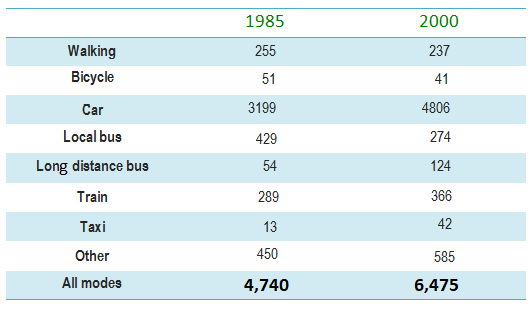 Model Answer 1:
The line graph delineates how the vehicle preferences of British changed over the time by comparing the average distance an English travelled using different modes of carriers in 1985 and 2000. Overall, cars were British citizen’s primary mode of transportation and taxi was the least used mode of travel for them.

As the data suggests, an English travelled more than 6400 miles on an average in a year which was almost 36% higher than the distance an average Brit travelled in 1985. Car use predominated this total travel as more than 4800 miles out of 6400 in 2000 were crossed using automobiles and a similar trend was seen in 1985. Use of personal cars in truth increased over the time, as the data outlines. Reliance on buses was higher than train and bicycle use and despite an average 255 miles walking by a Brit in 1985, it decreased after 15 years.

Taxi was perhaps the least preferred mode of commuting as only 13 miles were travelled by a British using it in 1985 which, despite an increase in 2000, was ignorable. Train travel hiked in 2000 while distance travelled by British in local buses dropped. All other transportations contributed to 585 miles of travel by a Brit in 2000, an increase than that of 1985.


Model Answer 2:
The table data outlines transportation preference by British commuters between 1985 and 2000. As is obvious, cars were the most common means of travelling in the two mentioned years in the UK.

Interestingly, British did not use taxi quite often back in 1985 - only 13 miles per year was cut by every citizen which made the taxi the least common mode of transportation this year. However, this number increased to 42 miles per person in 2000. On the other hand, bicycles were one of the least used vehicles in 2000 covering only 41 passenger miles. It is clear that cars were still on top of preference among commuters, increasing from 3199 miles in 1985 to 4806 miles in 2000. Walking habits remained almost the same by British while the use of local bus declined. Each passenger travelled around 250 miles per year in trains and that rose to over 350 after 15 years.

In summary, the overall distance travelled by an English citizen went up from 4740 to 6475 miles in 15 years and the car was the primary means of transportation for them.

Sample Answer 3:
The table data shows information on the transportations used by British between 1985 and 2000. As is presented in the table, using the car was the most common way of travelling by English both in 1985 and 2000.

In 1985, more than 3000 miles out of total 4740 were travelled by an average British using cars that increased to well over 4500 out of total 6475 in the year 2000. The second most common way of travelling for these two years was the local bus which was far less than that of cars. Taxi was the least preferred transport both years amounting only 13 miles and 42 miles per person in these two years.

The bicycle was used for an average of 50 miles travel by each person in 1985 and that decreased to 41 miles in 2000 which show the decline of bicycle usages by British. Train, local distance buses were two other modes of transports by British, and their popularity increased over the time. In 1985, 255 miles were travelled by a British citizen on foot while this distance decreased slightly in 2000. All other transportations used comprised about 450 miles per person in 1985 which increased to 585 in 2000.

In summary, the popularity of car as a transportation increased among British people in 15 years of time and they mostly preferred to use cars as their means of travel.

Cars were by far the most popular modes of transports in both years in England. In 1985, the average distance travelled by English in a car was 3,199 miles, and 4806 miles in 2000. On the other hand, we can see that taxi was the least popular vehicle. Although the travelling distance in 2000 using taxi was above three times than that of 1985, only 42 miles were travelled per person this year, which was almost the same for the bicycle rides. No significant changes happened to some modes of travels, like walking and bicycle between 1985 and 2000. According to the table, in 2000 local bus was used less than that of 1985. Only 274 miles were travelled in 2000 by buses, which was 55 miles fewer than that of 1985. In contrast, the long-distance bus became more popular over the time. Each person travelled 124 miles by long-distance buses in 2000 while only 54 miles in 1985.

In summary, English people travelled more distance in 2000 than in 1985. It is obvious that cars were the most popular mode of travelling.

The column/bar graph compares the employment rates in six countries both for males and females in 1995 with that of 2005 in six countries. It is evident that employment rates for males were between 55% and 70% in 1995 while it was between 28% and 57% for women. The highest percentages of male employees were in Iceland and Switzerland and British, American and Swiss females were higher in ratio than that of other countries in terms of having a job. The employment ratio among citizens of the given countries improves in a decade and more employment among females improved significantly in 10 years.

RSS
Nguyen Thuong Vu 1 year 10 months
The given table compares the distance travelled and the means of transport used by English citizens in 1985 and 2000. As can be seen, people preferred cars to any other vehicles and the total distance covered increased after 15 years.

In 1985, an average English person drove 3,199 miles in private cars throughout the year, which accounted for around 80% for total distance travelled. The second most popular transport type was the local bus, standing at 429 miles of travel by an average English. Regarding bicycle and local distance bus, the figures for distance covered throughout the year were almost similar, both were over 50 miles.

It is worth noticing that in 2000, train gained more popularity while the opposite trend can be seen when it came to travelling on foot. In detail, walking distance reduced from 255 to 237 miles after 15 years, but the figure for train travel surged to 366 miles. Throughout the given period, travel by taxi increased more than three times to 42 miles all the year and was similar to that by bike. The popularity of cars, as well as local distance buses, increased while that of local bus reduced.

As for other means of transport, they accounted for roughly one-tenth in 1985 and one-eleventh in 2000. All in all, the total distance for all modes of travel rose from 4,740 miles to 6,475 miles by the end of the given 15-year period.

Prazol Acharya 5 years 2 months
What scores will these model answers get?

Malek 5 years 4 months
Can anyone review this, please? Thank you in advance.

The table data gives information about modes of travel in England and the average distance in miles travelled per person per year, between 1985 and 2000.

Overall, the distance travelled on foot, by bicycle and by local buses declined over this period, whereas the rest of travelling mode increased. Using the car is obviously by far the most popular mode of travel in both years.

Firstly let us talk about means of transport that are less used in 2000. The average distance walked and travelled by bicycle fell slightly, from 255 to 237 and 51 to 41 miles per person respectively. The use of local buses also decreased dramatically, from 429 to 275 miles per person.

However, long-distance buses took more places in British people lives, with a significant increase from 54 to 124. The average distance travelled by train, taxi and car shot also up from 289 to 366, 13 to 42 and 3199 to 4806 respectively. It goes without saying that there are also other means of travelling, like planes, that grew from 450 to 585 miles per person.