The graphs show changes in spending habits of people in the UK between 1971 and 2001.

Write a report to a university lecturer describing the data. 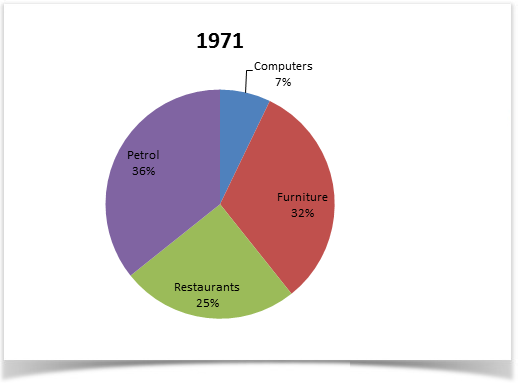 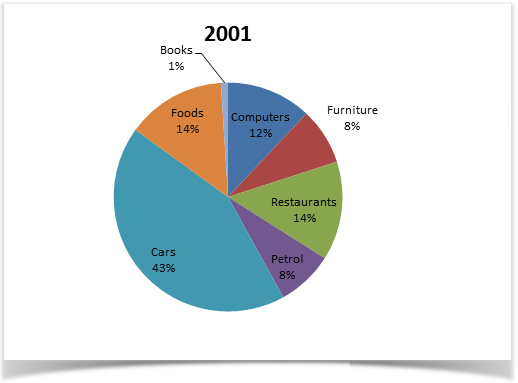 British spent more than one-third of their money on petrol and almost a third to purchase furniture followed by money spent in restaurants, which was precisely a quarter. The least proportion of expenditure was for computers, which accounted for 7% of total expenses by Brits in 1971.

After 30 years, British citizens spent significantly less portion to buy petrol, furniture and restaurant meals - 8%, 8%, 14% respectively. In comparison to 1971, they spent nearly double on computers. The largest proportion of household spending was made on owing cars with more than 40% total expenses. The proportion of expenditure on food was 14%. Finally, for books, it was considerably small, only one percent of total costs in 2001.

Sample Answer 2:
The provided pie charts give information on the spending habits of UK citizens in 1971 and 2001. As is observed from the charts, the expenditure on petrol & furniture reduced significantly while the amount spent on computers increased in the UK.

In 1971, British spent 36% on petrol which was the highest percentage among the given expense categories. Their expense on Furniture was second largest (32%) while they spent one quarter on restaurant meals. The least portion was spent by them for purchasing computers, which was only 7% in this year.

After 30 years, the expense to buy petrol and furniture reduced to 8% each, significantly lower than the percentages spent in 1971. But the expense made on computers increased by 5% in 2001. People spent 1% on books in this year. The expenses for restaurant decreased to 14% compared to the 25% in 1971. The highest amount spent in 2001 by the British was on cars and that consisted almost half of the total expenses in this year.

Model Answer 3:
The pie charts provide a statistical comparison on the difference in spending by the UK residents in 1971 and 2001.

According to the illustration, the largest proportion of spending by Brits in 1971 was on petrol, 36% o be exact, which was 4 times higher than their cost in this item in 2001. The second highest spending in 1971 was on furniture, which constituted 32% of all costs. Expenses on food remained approximately on the same level with one difference - in 1971, people preferred more to go to restaurants, while in 2001 they split up those to 14% to buy food for themselves and 14% to eat outside. It is interesting to note that almost half (43%) of the budget of the UK citizens was invested in cars in 2001. Costs on computers increased from 7% in 1971 to 12 % in 2001.

Overall, the spending habits of the British significantly changed during the period. Whereas in 1971 people spend most of the money for furniture and fuel, cars and computers have become the main investment in 2001.

According to the illustration, Brits used one-quarter of their total expenses to dine in different eateries while almost one-third to own furniture. Petrol cost them the highest, 36% to be precise, and those citizens spent only 7% to buy computers.

After 30 years, 43% of their expenses went on owing cars. Their cost ratio on furniture became one-fourth and they spend slightly less than half on restaurant meals as they did three decades earlier. How much they spent on home cooked food in 1971 was not provided but it was 14% in 2001. They spend 5% more for purchasing computers and petrol costs only 8% in 2001. The least percentage of spending was made to buy books, for which no data was given in the early chart.

Marinda 6 years 8 months
The pie charts compare expenditures of British people between two years - 1971 and 2001. Expenses for each category are shown as percentages.

Overall, there was a significant change in the UK people’s expenditure over the 30 years. In 1971, studies were made only on four categories (petrol, furniture, restaurants and computers), while the research in 2001 expanded to include extra three categories (cars, foods and books).

In 2001, there was a substantial decrease in British citizens' spending on furniture, from 32% to 8%. Their expense petrol expense decreased around four times in 2001 than it was in 1971. Furthermore, the expenditure on restaurants declined to almost half which was just over 12% in 2001. On the contrary, there was a 5% increase in computer-related costs after 3 decades.

Cars in 2001 constituted the largest proportion of expenditure by British which was 43%. Foods made up 14% of total expenses in this year which was similar to restaurant expenditure. Finally, the money spent on books in 2001 was 1% which was the lowest expense among all the categories.

Pirabaaliny Sivapatham 7 years 6 months
I would like to prepare for IELTS writing task 2. I took the test and got 6 in this section. I need to get 7 band score.