Following are the vocabularies for Academic IELTS Writing Task 1 grouped as Noun, Verb, Adjective, Adverb, and Phrase to help you improve your vocabulary and understanding of the usages of these while describing a graph.

A growth: There was a growth in the earning of the people of the city at the end of the year.
An increase: Between noon and evening, there was an increase in the temperature of the coast area and this was probably because of the availability of sunlight at that time.
A rise: A rise of the listener in the morning can be observed from the bar graph.
An improvement: The data show that there was an improvement in the traffic condition between 11:00 am till 3:00 pm.
A progress: There was progress in the law and order of the city during the end of the last year.

A surge: From the presented information, it is clear that there was a surge in the number of voters in 1990 compared to the data given for the previous years.

A rapid increase/ a rapid growth/ a rapid improvement: There was a rapid growth in the stock value of the company ABC during December of the last year.

N.B: Following adjectives can be used before the above nouns to show a rapid growth/ increase of something:

A/ The peak: Visitors number reached a peak in 2008 and it exceeded 2 million.
Top/ highest/ maximum: The oil prices reached the top/ highest in 1981 during the war.

N.B: Some of the words to present the highest/ top of something are given below: 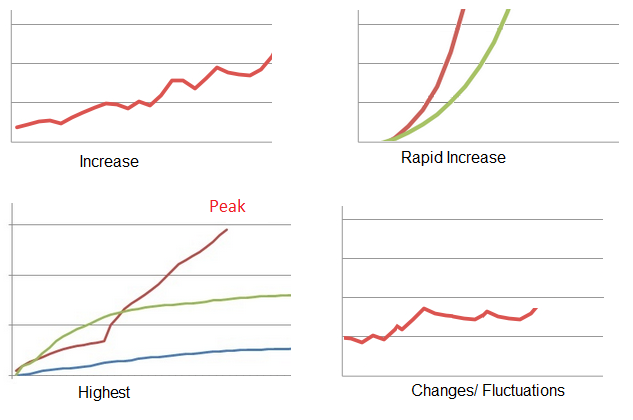 Stability: The data from the line graph show the stability of the price in the retail market from January till June for the given year.
A plateau: As is presented in the line graph, there was a plateau of the oil price from 1985 to 1990.

A fall: There was a fall in the price of the energy bulbs in 2010 which was less than $5.
A decline: A decline occurred after June and the production reached 200/day for the next three months.
A decrease: After the initial four years, the company’s share price increased, and there was a decrease in the bearish market.

Using 'Nouns' and 'Verbs' to describe trends in a graph: 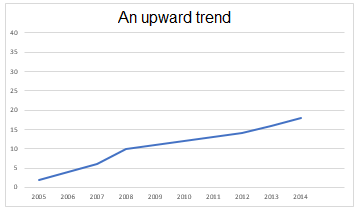 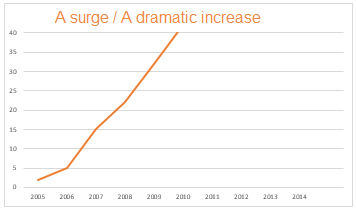 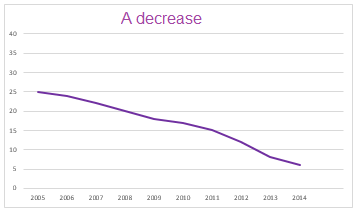 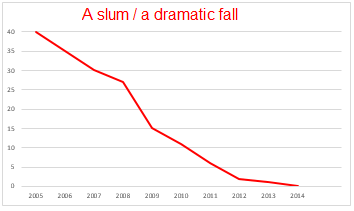 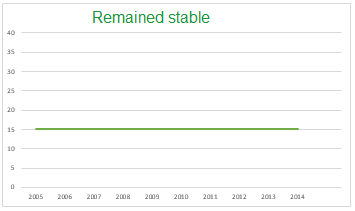 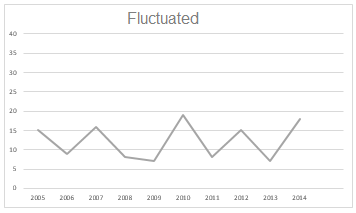 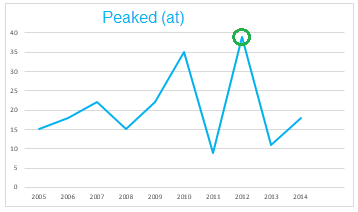 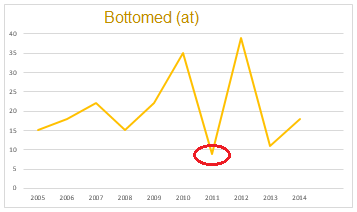 Use 'adjective/adverb' to indicate the movement of a trend.

Examples:
1. There has been a slight increase in the unemployment rate in 1979 at which point it stood at 12%.
2. The price of gold dropped rapidly over the next three years.

Vocabulary to compare to what extent / to (/by) what degree something is greater/higher than the other.

Vocabulary to show the sequence:

The above sentence makes it ambiguous to understand which mobile brand had what percentage of market share. If there are more than 2 values/ figures, you should always use 'consecutively/ sequentially/ respectively'. Using either of these words would eliminate any doubt about the above sentence as it will clearly state that the percentages of market shares mentioned here would match the mobile brands sequentially (i.e. first one for the first brand, the second one for the second brand and so on.)

Note: You do not need to use 'consecutively/ sequentially/ respectively' if there are only two values to write.

Vocabulary to describe different types of data/trends in a paragraph while showing a smooth and accurate transition is quite important. Following word(s)/ phrase(s) would help you do so in an excellent way...

» Then
» Afterwards
» Following that
» Followed by
» Next
» Subsequently
» Former
» Latter
» After
» Previous
» Prior to
» Simultaneously
» During
» While
» Finally.

Few more useful vocabulary to use in your report writing:

Maryam 2 years 7 months
Please add me to the WhatsApp group. Thanks.

Umer Farooq 3 years 1 month
How can I download the the reading passages?

Olga 3 years 7 months
It's not recommended to use "boom" in your IELTS test.

Eva Maria 4 years 2 months
Thank you very much for your hard work! Thanks to you. I am going to nail it :D! Cheers from Spain.

Navu 4 years 6 months
Thank you so much for this. It's very helpful for me.

Tamás 4 years 6 months
How was the test, Julia?

IELTS Mentor 4 years 7 months
Visitors like you inspire us to continue our hard work. Thanks a lot for your nice comment.

IELTS Mentor 4 years 7 months
We would say our hard work has been paid off. Thank you for your comment.

IELTS Mentor 4 years 7 months
Thanks a bunch to you too, Jenny. You have a great day too.

IELTS Mentor 4 years 7 months
Thanks a lot, Julkar Nain, for this inspiring and motivating comment. We wish you every success in your life.

IELTS Mentor 4 years 7 months
Siti, Our effort would be paid off if you achieve your dream score in your test. Best of luck.

IELTS Mentor 4 years 7 months
You need to download the IELTS answer sheet and then practice writing on it. This way you will have better ideas about the word count without actually counting it. In the real test, you should never waste time by counting words!!!You can down the answer sheet from https://www.ielts-mentor.com/download

IELTS Mentor 4 years 7 months
Archer, We will try to maintain the quality and do even better in the future. Best wishes to you.

IELTS Mentor 4 years 7 months
Thank you, Julia, for a very positive comment about us. We wish you all the best. We hope you will crack the test and achieve your desired band score.

Julia 4 years 7 months
It's a really helpful website to prepare for the IELTS test. I'll have the test on Saturday and need a 7 band score. Unfortunately, I have found this site just yesterday, wished I'd found it some weeks before... Anyway, thanks a lot for your effort! I'll do my best :)

Archer 4 years 9 months
I would like to thank you for the efforts you have put in penning this blog. I really hope to view the same high-grade content by you in the future as well.

Nonye 6 years 1 month
I would like to know how to count words so that I don't write less or more as required.

IELTS Mentor 6 years 2 months
Hi Pavlo, Thanks a lot for pointing out this mistake. We have, however, corrected it. Thanks again.

Kosha Kosh 6 years 5 months
Very useful and I learned a lot from this website. Thank you.

Turki 6 years 7 months
The website is really valuable. I learned a lot. I appreciate your effort. All the best :)

Siti Najman 6 years 7 months
Thank you for coming up with this website. It helps me a lot.

Julkar Nain 6 years 7 months
Thanks for this type of IELTS learning website. This is one of the best IELTS websites available online.

Prahlad 6 years 10 months
Thanks a lot to whom who developed this information and website.

Jenny 6 years 10 months
Thank you for your topic. It is very useful for teachers and students. Have a great day Mentor. Jenny.

Samar Abbas 6 years 11 months
I am Samar Abbas from Khanewal Pakistan. I am getting a lot of help from that website. I am having problems regarding the writing task 2/ essay writing and I need help especially in task 2. Please tell me how to deal with that problem and send me some tips and that’s my email id - Samarabbas066@g mail.com.

Gagandeep Singh 7 years 2 months
This is an incredible website for students and teachers. I gained ample things from it. Thanks to all IELTS mentor team. May you progress with leaps and bounds.

Mohammad Shirkhanloo 7 years 3 months
Hi, there. In the first degree, I do appreciate the effort that is allocated to the assisting resources here for IELTS. I was wondering if you could aid me in teaching different skills for IELTS. I mean to reproduce the influential tips that can be useful in teaching IELTS. Please reply me at your earlier convenience. Respectfully submitted. That's my e-mails: hunnamed@yahoo.com.

Abdul Majeed 7 years 3 months
Clearly, I found it very helpful for me. Thank you so much, all people who have worked for this website.

IELTS Mentor 7 years 4 months
Dear Hassan, we are very glad that you found this website useful. Thanks a lot for your inspiring comment.

Hassan Hashemi 7 years 4 months
Your website is one of a kind. Absolutely useful material. I don't know how to thank you. Wish you all the best.

Johnny Rey Funa 7 years 5 months
I have learned a lot from this website. Thanks, IELTS mentor team.