Read the text below and answers questions 28-40 on your answer sheet.

You should take around 20 minutes to complete this task.

Read the text below and answer Questions 1–7.

Bicycles: From Push to Pedal 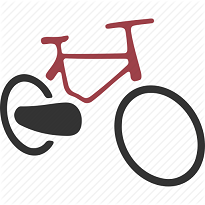 A.   Before they were equipped with pedals and a chain, what we refer to as a ‘bicycle’ today used to be called a Dandy Horse or ‘Pushbike’. German inventor Karl Drais first assembled pushbikes in 1818. They had two wheels, both in-line, and were propelled by the rider pushing along the ground with his feet to rotate the wheels. The front wheel had a handlebar attached that the rider gripped to control the direction. They were speedier than walking and were considered a fast mode of transportation at the time. Unlike today, these first generation bicycles were owned only by the wealthy.

B.   In 1821 an English inventor, Louis Gompertz, added a hand-driven ratchet mechanism, to the front of the bicycle wheel that permitted motion in one direction and created more speed out of every up and down push of the feet. Another significant change to the bicycle occurred in 1839 when Scottish blacksmith Kirkpatrick MacMillan invented a special part for bicycles known as a mechanical crank. The crank was a kind of lever that allowed more force and speed to both front and rear wheels.  Six years later in 1845, another English inventor, R. W. Thompson, developed a special kind of pneumatic (air-containing) tyre. When wrapped around the iron-made wheels of the bike, this tyre made the ride much smoother.

C.   A revolutionary change took place in 1850 when Frenchmen Pierre Michaux refined the design of bicycles in such a way that no longer required the rider to push down toward the ground in order to rotate the wheels. He redesigned it by making the front wheel exceptionally large and then placed a seat on top of it.  Michaux added pedals to the large front wheel and kept the diminutive rear wheel to help with balance. This addition meant that rather than the operator having to push along the ground as though walking or running, the bicycle could cover longer distances much faster. Up to that point, the design of Michaux’s bicycle most closely resembled the modern bicycles of today.  However, these primitive bicycles, known as Boneshakers or penny-farthings, were extremely difficult to ride due to their high-seats and the need for expert balancing skills. In 1885, John Kemp Starley, a British inventor and industrialist, solved most of the problems of the Boneshakers by introducing a chain drive – a device that connected the pedals with the rear wheel.  He also redesigned the frame of the bicycle and reduced the front wheel diameter ensuring more stability and enabling people with only average balancing skills to ride them. Starley’s Rover Safety Bicycle was warmly welcomed by the masses and was exported to many countries. Many historians define Starley’s Rover as the first modern bicycle.

D.   The next big step forward for the bicycle was the development of an efficient braking mechanism. Prior to the advent of brakes, riders had to use their feet to reduce their speed. However, in 1898 hand-operated cable-pull brakes attached to the handlebars were first introduced by a German inventor, Achim Conrad. During the beginning of 19th-century derailleur gears were invented. They contained a chain and multiple sprockets (1) that could create more speed out of every rotation of the pedals. Gradually, the technology used in making and setting the chain improved. Chains made of stronger metal with small sprockets were introduced as part of the bicycle wheel, which made it easier for the rider to pedal without losing speed. Another important change was in the weight of bicycles. The configuration of two same-sized wheels with rubber tyres and the body of the bicycle made of hollow rods rather than solid metal, considerably reduced the weight and enabled riders to have more control. These design changes also helped to reduce the risk of injury caused by a heavy bicycle.

E.   It was not until the 1930s that bicycles became a popular form of transportation for the working class. This was due to dramatic improvements in the production process of bicycles, which, in turn, led to a fall in their price. The supply of bicycles increased in the market as a lot of manufacturing businesses and individual entrepreneurs started making and selling bicycles in large quantities. The widespread use of the bicycle during that time inspired several manufacturers like Mead, Sears Roebuck, and Montgomery Ward to design bicycles for children who were a new and unexplored segment of the bicycle user market. The design of these bicycles incorporated unique design elements such as bent handlebars for easier manoeuvrability, carriers above the rear wheel for school bags and even a pair of small safety wheels on both sides of the rear wheel for children learning to ride for the first time.

F.   Considered by many to be the most significant innovation in the history of the bicycle after the invention of the Boneshaker almost 100 years earlier, running gear was invented by engineer Glenn Wright in the 1950s. This running gear featured quick-release wheels, derailleur gears and cable-operated brakes.  During the 1960s, manufacturers started using aluminium alloy in wheel rims, handlebars and seat posts that made the bicycles even lighter and also more visually appealing. These aluminium alloys helped prevent the body of the bicycles from rusting which also made them last longer.

G.   Since the 1980's the technological improvements in bicycle manufacturing have reached a new peak. New materials such as titanium and carbon fibre have become widespread. The separate brake and gear systems in bicycles have become one, combined system. New accessories such as front and back lights, drink carriages, tyre pumps and non-slip handlebar covers have become standard parts of most bicycles. In the late 1980s, mountain bikes were formally introduced to the market.  These bikes became the focus of a new and adventurous sport, where bikers raced through rugged terrain. For reasons of being environmentally friendly, user-friendly and widely available throughout the world, bicycles will continue to grow in popularity well into the future.

Look at the following statements 28-33 and the list of people below A-H.

Match each statement with the person it refers to.

34. MacMillan’s mechanical crank divided pedal force equally between the front and rear wheels.
35. Michaux’s bicycle looked like today’s bicycles.
36. Starley’s changes to the boneshaker involved making the front wheel smaller.
37. The sprockets in the derailleur made the bike go faster.
38. The use of hollow rods made bicycles easier to ride.
39. Running gear was invented around 100 years prior to the boneshaker.
40. It is expected that the bicycles of the future will be even more environmentally friendly.

Rich 2 years 8 months
Whoever thinks the answer to question 39 should be 'True', should read the whole sentence properly. It says-

"Considered by many to be the most significant innovation in the history of the bicycle AFTER the invention of the Boneshaker almost 100 years earlier, running gear was invented by engineer Glenn Wright in the 1950s".

It clearly says that running gear invented by Glenn was the most significant innovation in the 1950s AFTER the invention of Boneshakers (Boneshakers was invented 100 years earlier).

Whereas question 39 says that Running gear was invented 100 years before Boneshakers... So the answer is "FALSE".

So the answer is "True".