You should spend about 20 minutes on Questions 28-40, which are based on Reading Passages below.

Write answers to questions in boxes 28-40 on your answer sheet.

Read the text below and answer Questions 28-40.

Questions 28-34
The following reading pages has seven sections A-G.
Choose the correct heading for each section from the list of headings below.

Write the correct number i-x in boxes 28-34 on your answer sheet.

A.   A bee’s brain is the size of a grass seed, yet in this tiny brain are encoded some of the most complex and amazing behavioural patterns witnessed outside humankind. 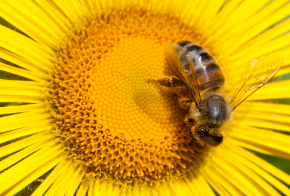 For bees are arguably the only animals apart from humans which have their own language. Earlier this century Karl von Frisch, a professor of Zoology at Munich University, spent decades of ‘the purest joy of discovery’ unravelling the mysteries of bee behaviour. For his astonishing achievements he was awarded the Nobel Prize and it is from his work that most of today’s knowledge of what bees say to each other derives.

B.   It started simply enough. Von Frisch knew from experiments by an earlier researcher that if he put out a bowl of sweet sugar syrup, bees might at first take some time to find it but, once they had done so, within the hour, hundreds of other bees would be eagerly taking the syrup. Von Frisch realised that, in some way, messages were being passed on back at the hive1”, messages which said, ‘Out there, at this spot, you’re going to find food.’

C.   But how was it happening? To watch the bees, von Frisch constructed a glass-sided hive. He found that, once the scout bees arrived back at the hive, they would perform one of three dance types. In the first type, a returning scout scampered in circles, alternating to right and left, stopping occasionally to regurgitate food samples to the excited bees chasing after her. In the second dance, clearly an extended version of this round dance, she performed a sickle-shaped figure-of-eight pattern instead. In the third, distinctly different dance, she started by running a short distance in a straight line, waggling her body from side to side, and returning in a semi-circle to the starting point before repeating the process. She also stopped from time to time to give little bits of food to begging bees. Soon the others would excitedly leave the hive in search of food. Minutes later, many of them, marked by von Frisch, could be seen eating at the bowls of sugar syrup.

D.   Experimenting further, von Frisch unravelled the mystery of the first two related types, the round and the sickle dances. These dances, he concluded, told the bees simply that, within quite short distances of the hive there was a food source worth chasing. The longer and more excitedly the scout danced, the richer the promise of the food source. The scent she carried in her samples and on her body was a message to the other bees that this particular food was the one they were looking for. The others would then troop out of the hive and fly in spiralling circles ‘sniffing’ in the wind for the promised food.

E.   At first, von Frisch thought the bees were responding only to the scent of the food. But what did the third dance mean? And if bees were responding only to the scent, how could they also ‘sniff down’ food hundreds of metres away from the hive, food which was sometimes downwind? On a hunch, he started gradually moving the feeding dish further and further away and noticed as he did so, that the dances of the returning scout bees also started changing. If he placed the feeding dish over nine metres away, the second type of dance, the sickle version, came into play. But once he moved it past 36 metres, the scouts would then start dancing the third, quite different, waggle dance.

The measurement of the actual distance too, he concluded, was precise. For example, a feeding dish 300 metres away was indicated by 15 complete runs through the pattern in 30 seconds. When the dish was moved to 60 metres away, the number dropped to 11.

F.   Von Frisch noted something further. When the scout bees came home to tell their sisters about the food source, sometimes they would dance outside on the horizontal entrance platform of the hive, and sometimes on the vertical wall inside. And, depending on where they danced, the straight portion of the waggle dance would point in different directions. The outside dance was fairly easy to decode: the straight portion of the dance pointed directly to the food source, so the bees would merely have to decode the distance message and fly off in that direction to find their food.

G.  But by studying the dance on the inner wall of the hive, von Frisch discovered a remark-able method which the dancer used to tell her sisters the direction of the food in relation to the sun. When inside the hive, the dancer cannot use the sun, so she uses gravity instead. The direction of the sun is represented by the top of the hive wall. If she runs straight up, this means that the feeding place is in the same direction as the sun. However, if, for example, the feeding place is 40° to the left of the sun, then the dancer would run 40° to the left of the vertical line. This was to be the first of von Frisch’s remarkable discoveries. Soon he would also discover a number of other remarkable facts about how bees communicate and, in doing so, revolutionise the study of animal behaviour generally.

List the name the writer gives to each dance.
Use ONE WORD ONLY for each answer.
Write your answers in boxes 35-37 on your answer sheet.

Questions 38-40
Look at the passage about bee behaviour.

Complete the sentences below with words taken from the passage.
Write NO MORE THAN THREE WORDS for each answer.
Write your answers in boxes 38-40 on your answer sheet.