The chart below shows the number of men and women (in thousand) in further education in Britain in three periods and whether they were studying full-time or part-time. 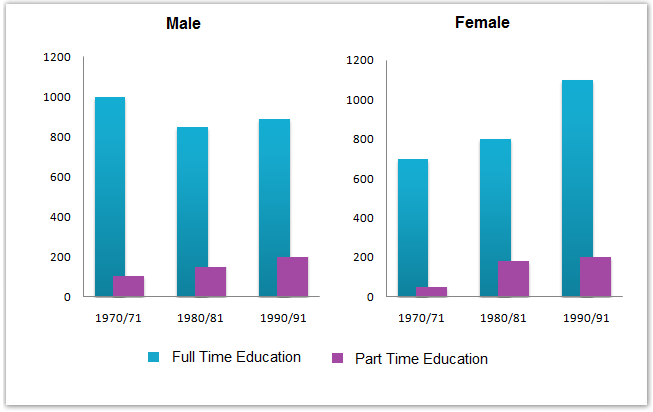 Sample Answer:
The given bar graphs show data on the British people’s full-time and part-time further education from 1970 to 1991. As is presented in the graphs, more men and women were studying full-time than part-time for the given period.

In summary, females made progress over their male counterparts in terms of their involvement in full-time and part-time education in Britain for the given period.

RSS
Bahrom 2 years 9 months
The illustration depicts the number of male and female post-graduate part-time and full-time pupils in Britain in three decades.

As is seen, full-time students in further studies in Britain were far higher than those of part-timers but as time progresses, part-time education gradually gained popularity. More importantly, more women participated in further studies than the past while the trend was opposite for the male.

In details, almost one million male in Britain participated in full-time education in 1970/71 while this number was just 100 thousand for part-timer in the same year. On the contrary, female full-timer was about 700 thousand and part-time female students were as low as 50 thousand. Over time, the participating women in further education increased and reached over 1.1 million while the number of male participants actually decreased and dropped to just above 900 thousand after two decades. Women did a remarkable improvement in terms of their involvement in further education in Britain as their number almost doubled in just twenty years. The same cannot be said for the male post-graduate students. Interestingly, part-time further education became more popular over the year as more male, as well as female students, became engaged in it.

Yubraj 4 years
By the end of the period, females are seen to have been working full-time more than male. Is it okay to use this form of tense in writing?