The chart below shows information about the challenges people face when they go to live in other countries. 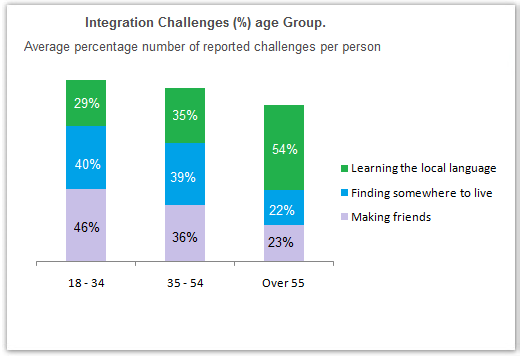 Model Answer 1:
The supplied graph represents data on the challenges people face when they start living in a different country and compares this data based on different age groups. As is presented in the graph, younger people struggle to make new friends while the aged people face difficulty to learn the local language in a new country.


Model Answer 2:
The presented chart gives information on the challenges the different age groups of people face when immigrating to another country.

As is presented, the three most common challenges all age groups face are making friends, finding a place to live and learning the local dialect.  The biggest difficulty the age group of people aged over 55 faces is learning the local language as compared to the other age groups, who don’t find it as difficult.  It is surprising to find that both age groups of 18-34 and 35-54 have challenges in finding a place to settle.  It is easier for the age group of over 55 to find a place to settle as they do not have to take many factors into consideration when deciding where to settle, for example, finding a place close to work, what kind of neighbourhood is good for bringing up a family, what public facilities are available in the area, access to the internet etc.  But they don’t have a hard time making friends as it is probably easier for them to do when still young.

To summarise, according to this chart, it is easier to go and live in another country while you are still young rather than when you are over the age of 55 as it is more difficult for you to adapt to the new culture and customs in a new country.

Model Answer 3:
The bar chart presents data about difficult issues people encounter when they try to settle abroad. The given data classifies those challenges into three main categories based on people’s age. Overall, it seems that young people in a foreign country can learn the local language easily whereas older people face fewer challenges to find a place to live in and they can make friends faster.

The first challenge that people face in abroad is ‘making friends’. 46% of people whose ages range from 18 to 34 find it as the most difficult task. In contrast, only half of that proportion among the oldest age group considers it as a difficulty. On the other hand, not many young people struggle to learn a new language (only 29%) while more than 50% of people over 55 think that is a real problem (54%). Facing with the problem to find a place to live in, about 40% of the younger groups get stuck with it while it is the least challenging issue for the older people who try to settle in a foreign country.

Rohan 5 years
The same person can face more than one problems and can thus come in both ratios. This is why the total summation could be more than 100. In the same way, it could be sometimes less than 100.

Renata 5 years 11 months
Very nice website. I have been working for a translation company and decided to study for the IELTS using your website. I am really amazed by the quality of the content. Thanks a lot.