The graph below shows the different modes of transport used to travel to and from work in one European city in 1960, 1980 and 2000. 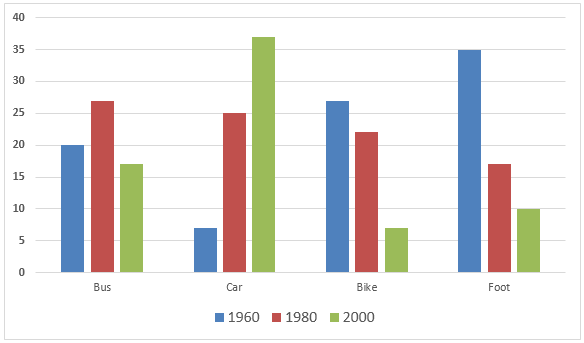 Sample Answer 1:
The column graph represents information on travellers’ commuting preference to reach office and return home in a European city in three different years- 1960, 1980 and 2000. overall, the car gained its popularity and the number of people who used to walk gradually decreased.

Besides, more than 27% people used bikes in 1960 and in 1980 the number decreased by 5% but in 2000 it dramatically fell to somewhat 7%. Finally, 35% people used to walk to go to work and to return from there. But this foot-walkers' number declined significantly in the 80s and in 2000 one out of ten office goers walked.

To summarise, more people used to walk to travel to and from workplaces in 1960 but with the popularity of private cars, this ratio declined.

Model Answer 2:
The bar graph gives data on different transportation systems that people used in a European city in three decades- 1960, 1980 and 2000 and also compares how the habit of going to work and returning home had changed over the 40 years period. Overall, with the widespread use of cars, peoples' habit of using bikes and walking reduced noticeably.

Initially, in 1960, lots of people used to commute either on foot or by a bike, 35% and roughly 27% consecutively compared to only about 7% private cars and about 20% bus usage. After 20 years, the number of car and bus users soared noticeably to 25% and to nearly 28%. The car users grew more than 3 times over 20 years and in the same year, people travelling on foot fell to less than half as it was in 1960. In 2000, only 10% work-goers walked, only about 7% people rode a bicycle compared to 18% bus users and about 38% private car users.

In 1960, the majority of the people travelled to and from work on foot or using a car but the scenario became completely different after 40 years when most of the people used cars or buses.

RSS
Nhatlinh 3 years 1 month
Hello, I thought that it shouldn't have any summary or conclusion in task 1? (the first sample)

Jagmeet Singh 4 years 4 months
It is fruitful for everyone.

Skyrocket 4 years 4 months
I want to share my work and hear some feedback.The bar graph depicts the percentage of usage of each means of transportation to and from work in a European City. The analysis was done in the year of 1960, 1980 and 2000.It can be seen that walking and driving a car going back and forth to work are two ways of transport that showed an opposite trend. In 1960, the majority of the commuters prefered to walk while only less than 10% of the workers used an automobile. However after 20 years, the former began to increase sharply by a fifth and further rose in 2000 that stood at almost 40%. While the latter, dropped significantly each year. Making it at the end of the period, fourfold lower than travelling to work with a car.Commuting via bus displayed a variation in trend. It improved by a tenth in 1980 but fell substantially in the last term to around 15%. On the other hand, the effort of riding a bike to work has declined fivefold throughout the time - half than travelling by bus.Overall, one may conclude that the usage of different kinds of transport to work has changed in a span of 40 years. It is also clear that going to work by foot was trendy in 1960 but was later on replaced by cars and buses in 2000.Thank You.

Elec 5 years 6 months
"Preferences of vehicles", foot is not a vehicle!