The chart shows the number of visitors to a local cinema according to age in 2000.

Visitors to the local cinema according to age 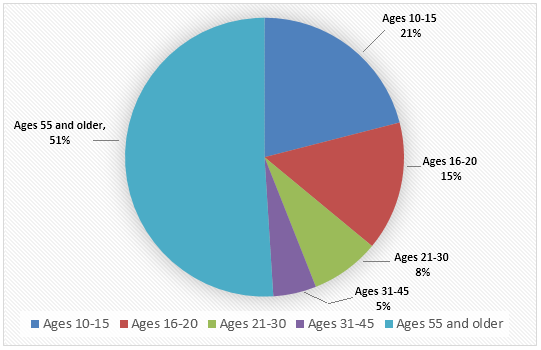 Sample Answer:
The given pie chart gives information about the local cinema goers in the year 2000. The visitors to the cinema are divided into 5 main categories based on their age and the percentages of their numbers indicate that elder people went to movies more than younger people.

As given in the chart, the percentage of older (over 54 years old) people who went to the cinema comprises more than half of the total cinema visitors. This indicates the trend of cinema watching tendency of older people. They went to visit cinema hall more frequently than all other cinema viewers.

People who were between 31 to 45 years old showed the least interest and their percentage of visiting cinema went lowest (only 5%). Among the other three age groups ( aged from 10 to 30), younger people showed more interests than adults and thus the age group 10-15 went to watch cinema more than other two age groups. After the age 20, the interest of going to cinema declined according to the graph and that increased dramatically among the older people.