The bar chart below shows the estimated sales of jeans for two companies next year in Turkey. The pie chart shows the projected market share of the two companies in jeans at the end of next year.

Estimated sales of jeans next year in Turkey 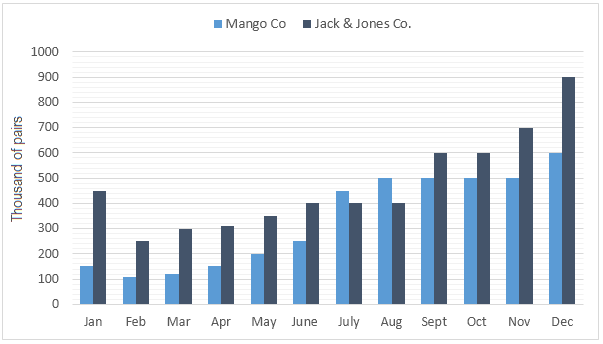 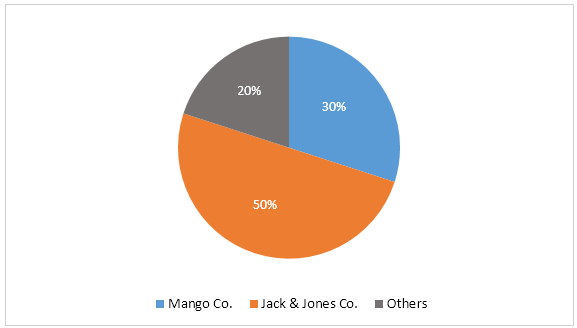 Sample Answer:
The column graph gives a projection on the next year’s jeans sales of two companies in Turkey while the pie chart compares their estimated market share. Overall, jeans sales are estimated to increase at the last quarter next year and Jack & Jones brand is anticipated to have half of the market share.

According to the first graph, Jack & Jones jeans clothing sale will be roughly 450 thousand pairs in Turkey, which is almost three times higher than that of Mango brand. At end of the first quarter, Jack & Jones is estimated to sell 300 thousand pairs of jeans in Turkey while it would be just above 150 thousand for Mango. In July and August, the demand for Mango jeans is estimated to exceed the demand of Jack & Jones. However, Jack & Jones is likely to witness a hike in its jeans sale during the last quarter of the year and in December it will sell 900,000 pairs, double than its sale in January. During the last quarter, Mango jean’s sale would remain almost the same except a surge in December to 600 thousand sales.

It is predicted that Jack & Jones alone will control the half of the market share while Mango corporation will have 30% market share. The remaining 20% would be controlled by the other jeans manufacturers.