The chart below shows the male and female internet users aged 15-24 in Canada in 2000.

% Canadian males and females aged 15-24 who used the internet 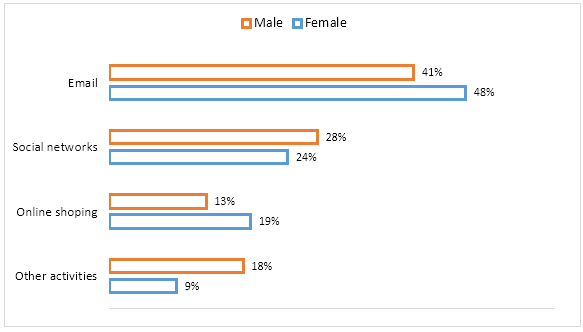 Sample Answer 1:
The bar chart outlines online activities of young Canadian males and females who were between 15 to 24 years old in the year 2000. Generally speaking, email communication was the most common activity among these users and a higher percentage of male internet users were engaged in social networking than that of females while women email users and online shoppers exceeded the ratio of male netizens.

According to the given illustration, young Canadian internet users primarily used email applications and their second most preferred online activity was social networking. Among the internet users, 48% females used emails and this ratio was 7% higher than that of male email users. Regarding the social networking members, 28% of these netizens were males and this ration was exactly 4% higher than that of females. Almost one in five young female intent users did online shopping while male online shopper’s percentage was 13.  The remaining 9% males were involved in other online activities while this was 18%, precisely double in the case of females.

Sample Answer 2:
The column graph shows what young Canadian internet users did in 2000. Overall, email communication was their primary activity while social networking and online shopping were their second and third most preferred activities.

As is presented in the graph, 41% Canadian male netizens between 15 and 24 years old used emails when they were online. 28% of these males used applications for social networking while 13% of them did online shopping. The remaining 9% young males were involved in other activities which are not explicitly mentioned in the illustration. Interestingly, a higher proportion of males were engaged in social networking than that of females from the same age group.

On the contrary, a higher percentage of females in Canada who aged between 15 and 24 years old used the internet for conducting email communication in 2000 and their ratio was 48%; 7% higher than that of males. Approximately one in every five females did online purchases and that ratio was also higher than that of males. Precisely 18% of them were involved in other online activities.

RSS
Habibur Rahman 1 year 9 months
How can I get an IELTS certificate?

Maria Ortega 1 year 9 months
You need to register for the IELTS test either from the British council or IDP and then take the test. The IELTS authority will issue you an IELTS certificate after evaluating your test performance and after scoring them. This is the only valid way to get an IELTS Certificate. If anyone says anything other than that, you are surely going to be duped. Be aware of false promises about certificates. they are useless and will cost you dearly!

Nguyen Thuong Vu 2 years 1 month
The provided chart illustrates how Canadians from 15 to 24 years old use the Internet. As can be seen, email communication is the most popular activity while social networks and online shopping are sequentially the second and third preferred.

According to the illustration, 41% of male Canadians mainly use the Intenet for email correspondings, and this figure is 7 percent less than the opposite gender. At the same time, just approximately a quarter of women put social networks as the top priority, while men represent a slightly higher proportion, 28%.

Regarding online shopping and other activities not mentioned, the differences between the two genders are quite similar to those of the previously mentioned purposes. While the percentage of female online shoppers is just under one-fifth, the figure for remaining activities stood at only 9%. The latter is exactly half of the men's proportion and below one-fifth when compared with the popularity of email among Canadian women.