The graph shows children by age group as a percentage of the young population in the United Kingdom between 1990 and 2001. 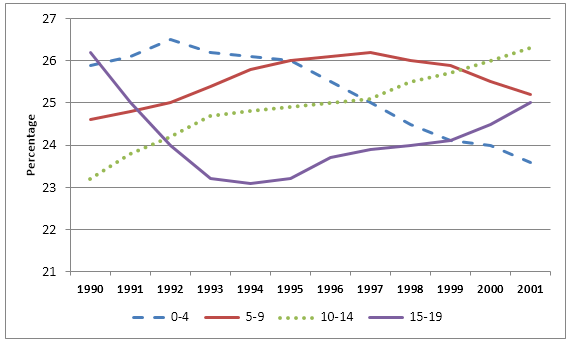 Moving further, 10-14 years British dominated the young generation in the UK with a steady increase in their percentage in later years despite their least proportion in early years. Finally, 5-9 years British children were over 26% during 1995-1997 but their ratio declined and finally stood at just over 25% in 2001.

RSS
Nadeem 3 years 5 months
The line graph illustrates how the young population in the UK varied during the 1990s comparing their ratio throughout a decade. Overall the trend shows that the ratio of toddlers among the young generation witnessed a decline, while the 10-14 years youngsters' percentage had seen an increase over time.

The detailed analysis shows that the ratio of infants (babies between 0-4 years old) declined in the UK over time. Their ratio among the youth in the UK was just below 26% in 1990 which dropped to somewhat 23.5% after a decade. In contrast, children between 10 to 14 years witnessed a positive growth rate in terms of their percentage change for the same time period and went above 26% in 2001.

The other striking feature is the drastic slump in the population of British teenagers (15 to 19 years old) for the period from 1990 to 1994 when it touched a low ceiling of almost 23% from a healthy 26%. However, it grew again thereafter and returned to 25% per cent.