The chart below shows the value of one country’s exports in various categories during 2015 and 2016. The table shows the percentage change in each category of exports in 2016 compared with 2015. 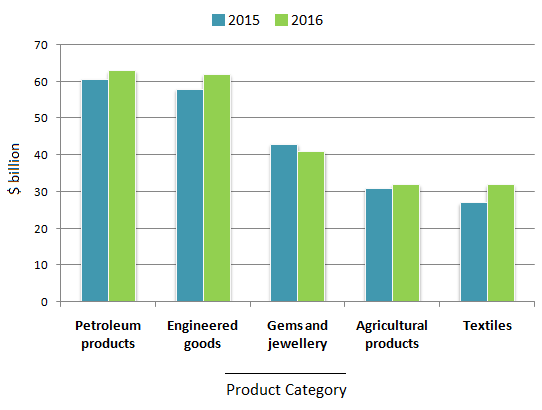 The bar graph compares export earnings of a country in billions of dollars from five different product categories in 2015 and 2016 while the table data outlines the percentage change in export revenue in 2016 than that of the previous year.

Overall, petroleum and engineered products were the main export revenue earners for this country both in 2015 and 2016, and the export amount increased in 2016 than the figure of previous years except for gems and jewellery commodities.

Next year, the country gained more export revenue except for jewellery products, revenue from which dropped by nearly 5%. Besides, the export of engineered goods soared by 8.5% while the highest increase was for textile products, over 15%. Finally, it earned 3% and approximately 1% more from petroleum and agricultural merchandises in 2016 than that of 2015.

Aizul Faideen 5 months 12 days
The chart delineates the export of a country in an array of categories comprising petroleum, engineered goods, gems & jewellery, agricultural products and textiles, during 2015 and 2016 while the table outlines the percentage change in each category during the respective years.

The petroleum product and engineered good painted a bit similar in patterns where the export figure stood exactly the same at 62 billion in both years although the engineered goods dipped a slightly less of 2 billion than that of petroleum products in 2015. In detail, petroleum products and engineered goods had progressed substantial increment by 3% and 8.5% respectively in 2016 than the previous year. Moreover from year to year, the percentage for the agricultural product was also just a little over 0.81% while textiles made up a tremendous change well above 15%. On the other hand, it was only the gems and jewellery category that witnessed a decrement change of around half of one-tenth in the following year.

Overall, it is noticeable that the exports had accounted for more than 200 billion over the periods consecutively. Interestingly, the exports exceeded by making up as much as 10 billion more in total in the latter year.

Rohan 10 months 25 days
The bar graph illustrates the export earnings of a country with respect to five products over a period of one year from 2015 to 2016. The y-axis represents the net earnings in billion dollars. While the table outlines the growth of each industry in export percentage change in 2016 than that of the previous year.

Overall, the two main product categories that stood high in export revenues were petroleum products and engineered goods for both the years 2015 and 2016. It can be seen that out of five categories, four have shown a positive gain in revenue except for gems and jewellery.

The growth in the textile industry saw a massive surge in comparison to other industries. The textile industry grew by 15.24% which is way higher than engineered goods that stand second with 8.5% growth. Petroleum having the highest revenue did not receive much growth and had only 3% growth. Among the lowest growing products, agricultural products saw a very minimal 0.81% growth whereas gems and jewellery showcased a negative growth of 5.18%.

Bilal 11 months 2 days
It is helpfull information for me. Thanks.

Chuiharu Matsumoto 1 year 5 months
The bar graph and table data illustrate the exports of a country between 2015 and 2016. The bar graph depicts the export amount of each category in billions of dollars, and the table presents the change in export quantity in 2016 compared to that of 2015.