The plans below show a public park when it first opened in 1920 and the same park today. 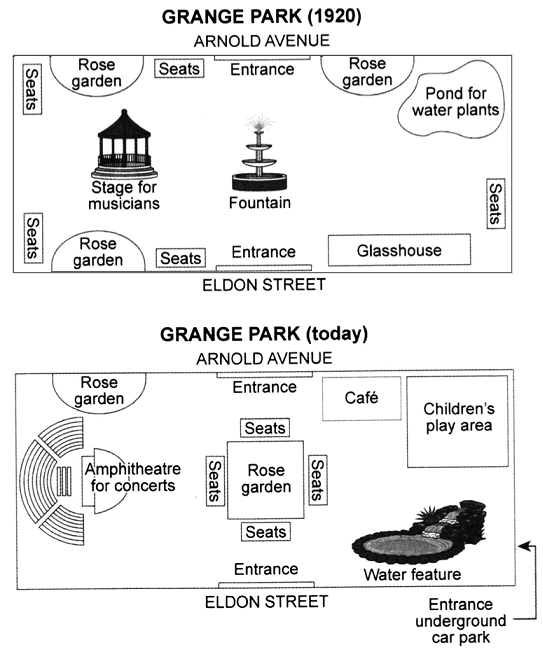 The maps outline the changes that took place in a public park called Grange Park from 1920 to today. Overall, the park was changed and renovated to offer people more possibilities than they used to have decades ago such as a cafe, theatre, playground and parking.

In details, the park was opened in 1920 and entertainment facilities including a larger stage and various areas for recreation have since been added to it. There was also notable relocation in terms of seats and the only areas that remained unchanged were the entrances and one minor garden. Besides, the fountain has been removed in favour of a rose garden with full seating arrangements around it. To the left of the new garden, the previous stage for musicians has been turned into a much larger amphitheatre facing the opposite direction that will allow for concerts in the park. This change has necessitated the removal of both seatings on the far left side as well as the rose garden in the bottom left corner of the map.

Moreover, the pond for water plants was removed from the right -top part of the garden and a children's play area was introduced in the right-top of the park, and near this area, a cafe was built. Instead of the pond, a water feature has been built occupying the bottom right corner. Interestingly, the number of rose gardens was reduced to two. Besides, an underground car park was built in the lower right corner of the park.

The maps illustrate the overall development of Grange park in Arnold avenue staged in two different periods - the first one depicts the park during its inauguration in 1920, and the latter portrays its present-day layout.

Generally speaking, the overall layout of the park has been changed drastically except for the main entrances at Arnold avenue and Eldon Street.

The park first opened in 1920, and it went through drastic developments since then. To begin with, the key feature of the park- the central fountain, has been demolished. The rose garden was earlier scattered around the periphery of the park along with the seating arrangements, but now it has been remobilised to the centre of the park. Meanwhile, the stage for the musicians has been further converted to an "Amphitheatre" for concerts to accommodate a larger crowd. However, the rose garden on the northwest has been retained.

Besides, the glasshouse on the southeast side has been redesigned with a water feature and an underground entrance to the car park for visitors. The addition of amenities such as the cafe on the northeast side adjacent to Arnold avenue was also done. Finally, the pond of water plants was redesigned to accommodate a children’s play area.

Dear Sir or Madam, please help me with my IELTS Speaking module.

Please send an email on my id ak62907@gmail.com. I can help you as I got 6.5 overall. This is for everyone who is facing problems in IELTS academic module.

Anna Adrian 4 months 29 days
The given maps portray the landscape of Grange park decades ago and how it is refurbished at present.

Overall, it could be seen that the park has been renovated and was changed to offer people more possibilities than they used to have decades ago such as café, children's play area, underground car park.

Grange park which was opened in 1920 had a small stage for musicians on one side of the park and the water fountain was exactly in the middle of it while seats and rose gardens were visible around the park. Meanwhile, a pond, in order to water plants, was located at the edge of Arnold Avenue and exactly opposite to it was the glasshouse.

However at present, after the tremendous transformation, the stage was rebuilt as an Amphitheater for concerts to accommodate a large volume of population and significantly the fountain was demolished and a breathtaking rose garden was built with seats around it. Moreover, the pond was replaced with a children's play area and a cafeteria next to that was built in order to satisfy the cravings of the escalating population. A modern water feature was visible although the entrances from both Arnold avenue and Eldon Avenue remained the same.

Amrit 5 months 24 days
The plan shows the Grange park layout and highlights the major differences in the plan - when it was opened in 1920 with that of today.

In detail, while the entrance to the park remains the same, the major difference can be noticed in a few elements which have been changed keeping in mind the current day requirements. Underground parking has been added to cater to the vehicular needs of people these days. One of the rose gardens has been converted into a café so that it can cater to the beverage needs of the people visiting the park. Moreover, the fountain has been replaced by a rose garden, with seating options surrounding it. This overall makes a brilliant setup for the people who want to have some coffee while relaxing amidst nature.

Tuyet Nhung Truong 10 months 6 days
Do I have any mistakes? Thank you in advance.

The maps illustrate several changes which took place in Grange Park from 1920 to till now.

Overall, it can be seen that the park today has changed dramatically since 1920. It is noticeable that most places have been replaced and renovated while only the rose garden to the North West corner in the park has remained the same.

On the other hand, today the park has changed significantly. Firstly, the middle of the park has a rose garden, which is surrounded by seats. Secondly, the pond at the top right-hand corner has been replaced by the children’s play area. Thirdly, the glasshouse has been converted into the water feature, which is opposite the children’s play area. Finally, on the left-right hand, a stage for musicians was demolished, and an amphitheatre for concerts was constructed.

In general, the park has been changed and renovated to offer people more possibilities and facilities than they used to have decades ago, and some of the facilities include a cafe, children's area, and playground.

Starting from the left side of the park, the stage for musicians was replaced by a larger amphitheatre. In 1920, there were small rose gardens scattered along the park. However, one of the gardens remains the same at the northwest corner of the park while the other two have been integrated and relocated at the centre of the park, where the fountain used to be. There was also the relocation of the seating arrangements. Now the big rose garden has full seatings arrangements around it.

Moving on to the right side of the park, with the small rose garden demolished, a cafe has been put into use on this site. Moreover, a water feature has been added to the place where the fountain used to be. A pond of water has been substituted by the children's play area. A new underground car park was built to offer visitor spaces for parking.

Eva Zheng 1 year 1 month
The maps outline the changes Grange Park has been through since 1920. It is obvious that the park has experienced a significant modernization with facilities renovated and updated.

One notable change is that an amphitheatre for concerts has replaced the previous stage for musicians. In 1920, there were three small Rose Gardens scattered along the park. However, one of the gardens remains the same at the northwest corner while the other two have been integrated and relocated to the park’s centre, where the fountain used to be. Now the big rose garden has full seating arrangements around it.

As for the right side of the park, with the small rose garden demolished, a café has been put into use on this site. What is more, a water feature was introduced into where the glasshouse used to be. The same thing happened to the previous pond for water plants which has been substituted by the children’s play area. A new underground car park has been built to offer visitors space for parking.

Kasun Madusanka Silva 1 year 1 month
Given two plans of the park depict changes that have been made to the park since it was opened in 1920. Through renovations and changes, the park's appearance and almost each and every facility changed other than the rose garden to the North West corner in the park.

It is observed that the overall layout of the park transformed to get a new look. But, the North gate from Arnold avenue and the South gate from Eldon street remained unchanged. The fountain at the centre was replaced with a rose garden. All seats located around the park were moved around this new rose garden. Furthermore, a children's play area and a cafe close to it made at the top right corner of the park replacing the pond for water plants.

Farid 1 year 3 months
The changes in a public park are demonstrated in the given two pictures.

Overall, obviously, a comparison of the two pictures reveals that the park got more touch of urbanisation. The park area went through significant developments and the only area that was left unchanged was the rose garden.

regarding the right side of the area, the rose garden and pond which were situated to the northeast of the park were transformed into a cafe and a children's play area, respectively. The decision to demolish the water feature paved the way for the construction of the glasshouse and seats. Furthermore, the underground car park area has been built considering the comfort of the visitors.

Gaj 1 year 4 months
1) This is labeled up above as graph Writing - Pie Charts, but obviously it is a Comparative Maps exercise.

Juni Maharjan 2 years
The map illustrates the renovations that have been made in Grange Park these days with comparisons in 1920. From the diagram, it is clear that most of the structures of the garden have been modified over a period of about a century.

Initially, the fountain was located at the centre of the garden which has been replaced by the rose garden with a full seating arrangement around it. Café and children's play area were developed replacing small rose garden and pond for water plants on the right side of the entrance in the garden. For maintaining the crowd in the park, there were two entrance gates before but now on they have added one more underground entrance specially designed for car parking.

Similarly, the stage for musicians has been converted into a large amphitheatre for concerts facing the opposite direction for concerts in the park. Water feature, small water pond with steps waterfall, has been introduced just nearby children park which has enhanced the beauty of the park.