The plans below show the site of an airport now and how it will look after redevelopment next year. 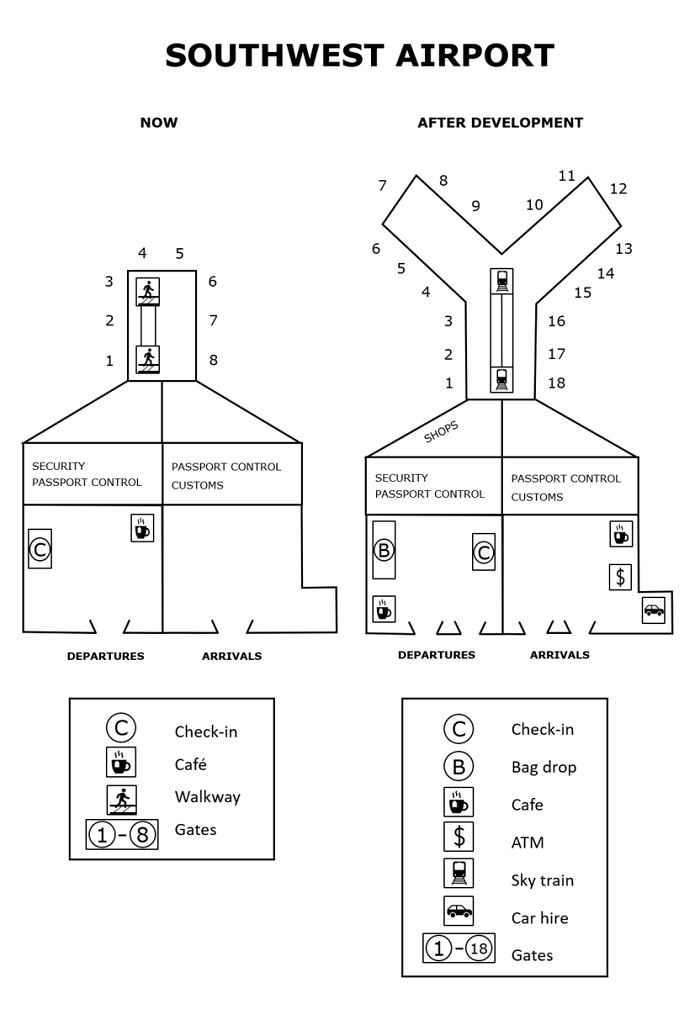 The diagrams portray what the Southwest airport looks like now as well as what the same place would be like a year later when the renovation works would be complete.

Overall, the Southwest airport will be expanded, and it will offer far more facilities and better accessibility for passengers after the development work is done.

As the illustration suggests, the airport now has a single arrival and departure area. The departure area is on the left of the building and has a cafe, while the arrival area does not have such amenities. Straight ahead of the arrival area, customs and passport control could be seen. Similarly, passport control and security are located for departing passengers. The airport now has eight gates, two walkways, and check-in areas.

After the development work, which is expected to be done next year, the airport will have eighteen gates, and a sky train inside the airport. New shops will be built, and the departing passengers will have access to bag drop facilities. It will be built where the check-in point is now. Opposite it, there will be the check-in point. The renovated airport will have more departure and entry points to serve more passengers at a time. It will also have ATMs and cafes for passengers in the arrival area. Finally, a car hire facility would also be included on the right-side of the arrival hall.

The provided plans present how the Southwest Airport looks now, as well as how it will look like the next year, after the renovation work.

Generally speaking, the airport will be developed, expanded and improved to provide more entry and departure terminals, and more gates, and would include new facilities for the departing and arriving passengers at the airport.

As the maps suggest, the airport now has eight gates, and two entry and departure points. The passengers use a moving walkway to get to their boarding gate areas. After the renovation of the airport, it will have a bigger concourse area with eighteen gates to serve more passengers at a time. Moreover, the walkway will be replaced by a sky train to offer faster movements for passengers.