You do not need to write down every bit of information presented in the graph. Rather, you are expected to write the most significant features of the graph and the highest and lowest points are two significant pieces of information you should not miss in your writing. Following is a list of useful vocabulary to learn by heart and to use in your graph response. 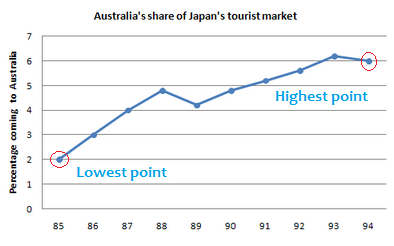 Vocabulary to represent the highest and lowest points in graphs:

1. The price of the oil reached a peak amounting $20 in February and again touched the lowest point amounting only $10 in July.
2. Student enrollment in foreign Universities and Colleges increased dramatically hitting a peak of over 20 thousand in 2004.
3. The highest number of books was sold in July while it was lowest in December.
4. The oil price reached a peak in 2003 while it was lowest in 2006.
5. The selling volume of the DVD hit the peak with 2 million copies sold in a month but after just three months it reached the bottom with only 20 thousand sold in a month.

Vocabulary to show fluctuations/ups and downs/ rise and fall in Verb forms:

You can present "percentage data" in one of three different ways. It is suggested that you use all these formats in your report writing instead of repeating the same style to show percentages in your writing.

Vocabulary to show how many times...

Vocabulary to show how much changed...

Vocabulary to represent comparison in graphs:

2. About 1000 people died in the highway car accident in 2003 which is well above the statistics of all other years.

3. The number of domestic violence cases was just below 500 in March which is just a little over than the previous months.

4. The average rainfall in London in 2014 was just above the average of two other cities.


Expressions to focus on an item in the graph:

Use the following expression to focus on an item in the graph.

» Similarly, In a similar fashion, In the same way, Same as, As much as, Meanwhile.
» However, On the contrary, on the other hand, in contrast.

One-Syllable
Adjectives with one syllable form their comparatives and superlatives form. In your academic writing task 1, you will often use such comparison and contrast related words.

1. The fast-food items in uptown restaurants were comparatively cheaper than that of city restaurants.

2. The largest proportion of water was used in the agriculture sector in most of the Asian countries while the European countries used the highest percentage of water for industrial purposes.

3. The price of the book in store "A" is cheaper than the price of store "B".

4. The temperature decreased further and that made the weather condition worse.

5. The temperature was better in mid-April but in mid-July, it became worse.

1. Customers were happier than now, according to the survey, as the price was cheaper in 1992.

2. The overall production level of this company made the authority happier as it was doubled in the last quarter of the year.


But many form their comparatives and superlatives using 'more':

Examples:
1. Custom-made cars were more expensive in 2014 than they are now.

Vocabulary to show that something/a trend is similar or the same:

Use the following vocabularies if both subjects are the same/ identical:

Use the following vocabularies if both subjects are not identical but similar:

Way to show that something/a trend is just the reverse/opposite:

Rules of Time Preposition use:

»» Use preposition 'in' when you talk about years, months, decades, centuries, seasons.

»» Use preposition 'in' to talk about past or future.

»» Use preposition 'in' when you talk about a long period.

»» Use preposition 'on' when you talk about days (days of the weeks or special days).

Example:
Days of the week= on Sunday, on Friday, on Tuesday.
Special days= on New Year's Day, on your birthday, on Independence Day, on holiday, on wedding day etc.

»» Use preposition 'on' when you talk about dates.

»» Use preposition 'on'  when you talk about times (like morning/ afternoon/ evening/ night) of a day.

However, notice the below list that shows further use of prepositions 'in' and 'on' for periods of the days versus periods. This is often confusing and mistakenly used by IELTS candidates. Look at those, notice the use and memorise it.

»» Use preposition 'at' when you need to express an exact time.

»» Use preposition 'at' when you talk about meal times

Example:
At breakfast time, at lunchtime, at dinner time etc.

»» Use preposition 'at' when you talk about weekends, holiday periods, or the nighttime.

Example:
At the weekend, at Christmas, at Easter, at night etc.

Words to make a comparison /contrast:

A bit/ slightly/ a little/ only just/ approximately/ about/ almost/ precisely/ quite/ nearly/ considerably/ a huge/ a great deal/ quite a lot/ completely/ exactly...

Using Appropriate Prepositions:
You must use the correct preposition in IELTS writing task 1 to get a high score. Be accurate about the uses of to, by, of, off, in, on, for etc.

Examples:
» Papers are sold by the ream.
» Oranges are purchased and sold by the dozen.
» Students enrollment in the University has increased by 2% this year.
» Eggs are counted in dozens.
» Rice is measured in kg.
» He is junior to me by 4 years.
» The employees are paid per week in this factory.
» All these products are made of glasses.

Formal and Informal expressions and words:

RSS
Mohamud Ahmed Abshir 5 months 4 days
It is very dedicated work and also very helpful for me. Thank you very much. This website would help lots of IELTS candidates all around the world.

Hello! All;
I am searching for a speaking partner. Just ping me on Telegram @DDRMathew and email
mathewpv5232@gmail.com.

Htet Naing Aung 9 months 12 days
I am confused between "just short" and "just sort". I think they have different meanings.

Khawla 1 year
Many thanks.

Khawla 1 year
Very useful, many thanks.

Ena 1 year 8 months
Hi, I need a partner for speaking practice. My email address is enas.alzoubi10@gmail.com.

Shahid Hussain 2 years 5 months
Indeed very helpful and exhaustive contents of writing Task 1 for IELTS Exam takers. If anyone goes through these materials and learn everything correctly, he/she is sure to score 8-9 band score in the IELTS examination.

Thanks to those who have taken enough pain and given their time and labour for developing this web page. I salute them all.

Hannah 3 years 3 months
In the third example for the highest and lowest points vocabulary, the word "peak" has been misspelt as "pick".

Srikanth Yadav 4 years 3 months
Absolutely, good vocabulary for writing task 1. If anybody wants to practice speaking with me my number is 9640498320.

Alaeddin Mektebi 4 years 4 months
I seek a high band score in IELTS. If anyone would like to practice speaking, I'm ready and motivated. My WhatsApp number is 00905342451978.

Deep Ramgarhia 4 years 9 months
Can you help me?

IELTS Mentor 6 years 5 months
Thank you Rebaz for your comment. We will keep your suggestion in our to do list.

Rebaz 6 years 5 months
Great job. Could you please provide some notes on preposition usages in task 1?

Fijkry Pheak 6 years 11 months
It is really helpful for us, but the only one thing is that - It should have been included answer or question sheet. It would have been more helpful :)

Bozkurt 7 years
It is a very dedicating work and also very helpful for me. Thank you very much. This website would help lots of IELTS candidates all around the world.

Arslan Ali 7 years 10 months
It's a very helpful stuff, Thanks.

Robert 8 years 8 months
Really excellent post. The list of vocabulary presented here seems very helpful. Now I have the idea of the type of vocabulary I should be using for the IELTS essay.