The bar charts below give information about the railway system in six cities in Europe. 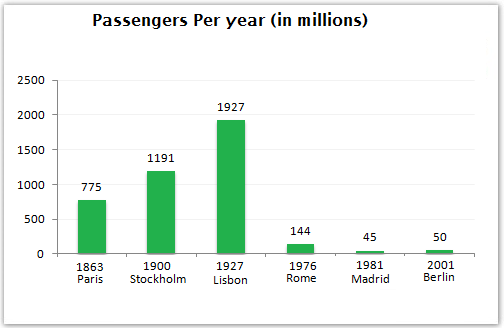 According to the illustration, Paris railway was established in 1863 and it now has around 400 km routes. Stockholm, the second oldest and second largest train system, was built in 1900 and expands it route to around 200 km. Lisbon and Rome train systems were inaugurated in 1927 and 1976 respectively. They have rail tracks of 155 and 126 km consecutively. Madrid has the smallest rail tracks, only 11 km, and they came into existence in 1981. Berlin train system was introduced as recently as 2001 and it has 28 km route in total.

Lisbon train station serves the largest number of commuters per year - almost 200 million. Nearly half of these train passengers travel in Stockholm while Paris, despite having the oldest and largest train system, facilitates only 775 million people per year. Rome with its 144 million yearly passengers serves almost three times higher travellers than that of Madrid and Berlin train authorities.

As far as the ages are concerned, Paris railway system was established earlier than railway systems in other cities. It was launched in 1863 while the Stockholm railway, firstborn among the remaining five, was inaugurated in 1900. Lisbon, Rome and Madrid's railways were established in 1927, 1976 and 1981 respectively. The latest locomotive, among the given cities, started in 2001 in Berlin.

In terms of the route sizes, Paris has by far the longest railway route - 394 kilometres. This route is nearly twice than the train routes built in Stockholm and more than thrice than the length of rail tracks in Rome. Madrid, in contrast, has the shortest rail route which is only 11 kilometres.

Considering the number of passengers these railway systems receive each year, Lisbon stands the first position with 1927 million passengers per year. Paris, despite being the oldest railway system, receives 775 million people in a year while Madrid serves the smallest number of train commuters, which is 45 million a year.

Sample Answer 3:
The bar charts show data on the railway system in six European cities and the number of commuters these railways serve each year. A glance at the illustration, Paris railroad is the oldest and it has the longest route. On the other hand, Lisbon railway is the busiest railroad which serves over 1900 million passengers a year.

According to the bar graph, Paris locomotive operation was established in 1863 which is the oldest among the given six cities and it now has the longest rail route, covering up above 390 km. Stockholm has the second largest rain tracks, about 200 km, and was established in 1900. Lisbon is another old railway system that was built in 1927 with more than 150 km of route. Rome, Madrid and Berlin railway systems were built after 1970 and among these three, Berlin is the latest that was built in 2001. Madrid has the smallest railway route with only 11 km.

Again, Lisbon railway is used by more than 1900 million passengers per years which makes it the busiest railway. Stockholm and Paris have two other busy railway systems which are used by 1191 million and 775 million of travellers per year. Finally, Rome, Madrid and Berlin railroads are used by comparatively fewer commuters, bellow 100 million per year.